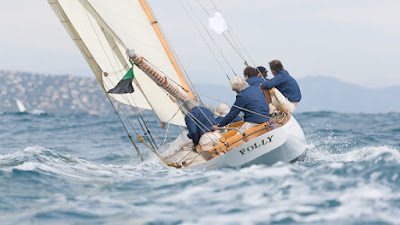 The time has come, all the entrants are in Saint Tropez and getting ready for tomorrow, Thursday, a day that will celebrate once more some of the oldest and most stunning classic yachts on the planet with a race specially conceived for them: The Gstaad Yacht Club Centenary Trophy. Twenty centenarians expected to be on the starting line for the sixth edition.


Tomorrow, Thursday, at least twenty centenarian yachts will compete in the regatta, that is unique in its genre and will celebrate its sixth anniversary. Over the years, the Centenary Trophy has gathered some of the most gorgeous and best performing classic yachts from the past century and this year is not different, with the addition of yet more entrants that have come of age.

The event, raced in a pursuit format with staggered starts, features an especially created and constantly refined handicap system, allowing very different boats in size and rig to compete on equal terms. A format that over the years has proved extremely attractive for the sailors and the specta-tors, with the first boat to cross the line off the St. Tropez breakwater to be declared the winner.
Among the classic yachts, ready to race and grab the prestigious Centenary Trophy, some aficionados like Lulu, Nin, Windhover or Owl and past winners like Marigold, Oriole and Olympian.
Owned by Argentinean designer German Frers Folly will be back for the second time "This would be the second time Folly races in the GYC Centenary Trophy. This year we hope the weather would be more benevolent than in 2015, with a lighter breeze: conditions where Folly does her best against the competitors, being one of the smallest boats in the fleet". Luckily the weather forecast for tomorrow is for a light to medium south-westerly of around 10/12 knots, perfect for the centenarians to race safely.

Celebrating her impressive 120th birthday this year, Nan of Fife will also come back to the Cen-tenary Trophy. "Built in 1896, Nan is part of the number of yachts built by the Fife's family, and the oldest still sailing to this day. Nan participated in all the editions of the Centenary Trophy so far and her crew is very much looking forward to race in the year of her 120th birthday", declared her always-enthusiastic owner and skipper Philippe Menhinick.
More information in English and French press release below
Past winners of the Centenary Trophy
2011: Bonafide (1899)
2012: Marigold (1892)
2013: due to adverse weather conditions the race could not be sailed and the title was not awarded
2014: Olympian (1913)
2015: Oriole (1905)
Gstaad Yacht Club organizes the Centenary Trophy in co-operation with the Société Nautique de Saint-Tropez.