Régates Royales - Trophée Panerai : The unbearable lightness of the wind 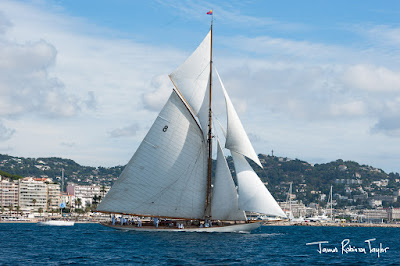 No wind for the last day of the 38th Régates Royales de Cannes, the bay of La Napoule looked almost totally flat, except for the occasional puff of breeze here and there. The crews and the organizers waited in vain for more than two hours for a decent wind to materialize but finally had to give up and go back to the Vieux Port of Cannes.


Nothing, just an ephemeral, occasional puff,  anything but a breeze good enough to launch a race. The high-pressure system hovering on the Cote d'Azur created an area of no wind in the Bay of Cannes, leaving the crews and the organizers empty handed on the last racing day of the 38th Régates Royales. Some crews were hoping to race to get the necessary points to be crowned winners of the closing event of the 2016 Panerai Classic Yachts Challenge, but they had to do with what they already earned in four races.

Grand slams and hardly contested wins
The week-long series ended after four races, almost all raced in southerly breezes varying from light (8 knots) to medium (15 knots). Only Moonbeam IV in the Big Boat division and   Freya of Midgard in the Spirit of Tradition class come out on top with a clear score: four wins out of four races. In the other classes, victory was more contested, as happened to Arrow that only had one point advantage on Carron II in the Vintage Marconi Arcadia beat British-flagged Ganbare in the Classics division by just one point, because the English boat could only discard a sixth while the French one could discard a tenth.
In other classes victory was less contested, with teams missing one or two wins but still getting on the highest step of the podium. Among the twelves Sovereign beat France, Italian-flagged Linnet won in the Vintage Gaffers in front of USA's Spartan; Enterprise got the better of Leonore in the Vintage Marconi Pitch got gold and Team 42 silver.

Already working for next year
The organizers of the Régates Royales expressed their satisfaction for the event that just ended and confirmed they are soon going to get back to work for next year's edition.
“The conditions have been excellent throughout the week of this 38th edition of Régates Royales de Cannes -Trophée Panerai. Except for some bad weather on Wednesday that did not  affect racing because the worst of it came when the boats had already docked. We had a truly impressive line-up this year, with 80 Classics, 50 Dragons and eighteen 5.5 Metres, that came to race in Cannes for the first time. They first competed in the Régate en Mer de la Société Nautique de Genève and later took part to the Régates Royales with a programme especially designed for them. And in two weeks' time we'll start working on next year's edition!” declared Pascal Gard, COO of the Régates Royales de Cannes
Jacques Flori, president of the Yacht Club de Cannes, added:“It was very close racing, in all classes, all week long. Good southerly breezes  enabled us to set excellent courses, with long, tactical and technical upwind legs. We managed to launch ten races for the Dragons and eight for the 5.5s in the gulf Juan. The wind made its appearance a bit late at times but all the crews expressed their appreciation of the race area. We had some newcomers: Linnet, Sincerity, Puritan, Sumurun and several others. Unfortunately, for logistics reasons, we can only accommodate a limited number of boats. We cannot say yes to everyone, but we did our best and worked hard to the very last minute to find a good mooring for everyone.”

Top designers
They were the most influent designers of their time, creators of extraordinary yachts that, over one hundred years later, still fascinate the world for their beauty, elegance and performance.
William Fife III is the naval architect who has the highest number of boats racing at the 38th edition of the Régates Royales de Cannes -Trophée Panerai, followed by the “Wizard of Bristol” Nathanaël Herreshoff and Briton Charles Nicholson. These three designers, who were active at the beginning of last century, before the International Rule was adopted (1907), worked hard to find the best possible hull shapes, used new materials (metal ribs, hollow masts etc.) to make hulls stiffer and sails more long-lasting.
The Fife dynasty reached its peak with William Jr's work from 1888 to the Second World War . His designs at this year's Régates Royales include the 23 Metre Cambria (1928), the 8 Metres Eva (1906) and Carron II (1935), Eilean (1937), the Marconi cutter Hallowe’en (1926), Moonbeam of Fife (1903) and Moonbeam IV (1914), Nan (1896) that inspired Pen Duick, the ketch Sumurun (1914) and the gaff cutter Viola (1908)…
Nathanaël Herreshoff began his career designing boats to compete in the early editions of the America's Cup: Vigilant (1893), Defender (1895), Columbia (1899 and 1901), Resolute (1920). The American designer is represented in Cannes by the replica of a gaff  schooner dated 1911: Elena, the longest yacht racing at the Régates Royales with her 60 metres of overall length. Herreshoff also designed the New York Yacht Club 50' one design Spartan (1913), the  NY40 footers Chinook and Rowdy (1916), the NY30 footers Linnet and Oriole (1905) that show, to this day, his ability to design fast and modern hull lines.
Charles Nicholson was also a naval “archistar” from the beginning of last century, despite never succeeding in winning the America's Cup with the boats commissioned by Sir Thomas Lipton: Shamrock V, Velsheda, Endeavour I and Endeavour II. Moored in the Vieux Port of Cannes are Marigold (1892), the oldest yacht racing in the event, and Oiseau de Feu (1937). Alfred Mylne should also be included in that age's top designer, having designed some of the most stunning boats of the early 19th century. Kelpie (1903) is the only Mylne design in   Cannes this year.
It was in the 1940s that a new design concept started to develop thanks to the contribution from New York based office of Sparkman & Stephens. Entreprise, Manitou, Skylark are all from 1937 and all racing in Cannes. Later in the century other designers came into the international yachting spotlight with the IOR rule: Britton Chance, Dick Carter, André Mauric, Doug Peterson, German Frers, Olin Stephens, Ron Holland…
Different hulls, sail plans, deck layouts... the early 19th century was a real melting pot of brilliant ideas and innovative technologies that we can still appreciate.