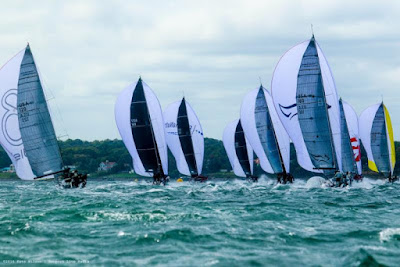 Newport, RI - There are many attractions that Newport offers for sailors around the world - an iconic sailing venue with a rich sailing history, great entertainment and of course, world renowned clam chowder. One unique Newport characteristic that greeted Melges 32 competitors on the first day of the 2016 Melges 32 World Championship hosted by Sail Newport was the front edge of a strong nor'easter that brought 20-27 kt winds on the race course and provided a wild, thrilling day of racing.

Typically lasting 4-5 days, nor'easters bring strong winds in a northeast to southwest direction and can be accompanied by heavy rain. Fortunately, the rain held off and once the fleet became acclimated to the blustery conditions, it didn't take long for the leaders to find their speed and assert their positions. Starting near the leeward end, two-time World Champion  (2013, 2014) Jason Carroll's Argo used solid speed to maintain a lane to the left corner and hooked into a nice left shift to lead at the top mark. Starting just below Carroll, was Ryan DeVos' Volpe who hung close, followed closely by his brother Rick DeVos on Delta.

With spinnakers set and pulling hard, the fleet blasted to the leeward gates and after another lap-and-a-half, Carroll hung on for the win. It was a close battle with Ryan DeVos finishing second and Richard Goransson's Inga from Sweden charging in to take third.

Post racing, Carroll summed up the day. "I think we are pretty good shape. It was a windy day in Newport, which I think everyone was happy with. Some puffs caught people off guard, especially downwind. Our goal is to tighten it up for Day Two."

Wasting no time in getting Race Two started, PRO Anderson Reggio squared his starting line and began the sequence. With a building chop, it looked as if the fleet would be late to the line. As the clocked ticked down, the fleet approached quickly with 2009 World Champion Pieter Taselaar sailing Bliksem and Ryan DeVos finding themselves OCS. The remainder of the fleet blasted to the windward mark in a slowly building breeze.

Picking a few shifts and getting left at the top of the course was Christian Schwoerer's La Pericolosa. Leading wire-to-wire, Schwoerer nailed every tack and gybe to get the win, followed in close pursuit by defending World Champ Alessandro Rombelli on STIG, then Giangiacomo Serena Di Lapigio's G-Spot.

A third race was scheduled for the day, however once teams began to assemble for the warning signal the breeze continued to build touching into the low 30s. Reggio wisely abandoned racing for the day with a slightly tamer forecast for Day Two.

Tied in points with Schwoerer for the overnight lead, Rombelli enjoyed the challenges of Day One. "We are very pleased with the results we have. The first two days of a world championship are the most important. Day one is not the day to win races, it's the day to minimize risks and damages," said Rombelli.

Three races are scheduled for Day Two which will bring the third day that the nor'easter has been present over Newport. Friday's conditions will be very similar to today, and the teams that can avoid big mistakes, handle the huge puffs and sail smart will potentially find themselves on the podium.

2016 Corinthian U.S. National Champion Chris Wientjes on Stormvogel enjoyed a nice day on the water in Newport to lead the amatuer division after two races. As somewhat expected, Morgan Kiss at the helm of Hydra for Project Sail hung in to finish the day in second, followed by Jeremy Alexis on Lucy.
MEDIA AND RACING COVERAGE
Every day, 2016 Melges 32 World Championship racing updates are posted online at the Official Melges 32 Facebook Page by Newport Live Media. Tune in for the latest racing information, results, video interviews, and photos. Race reports and press releases will be available online each day post-racing at melges32.com.