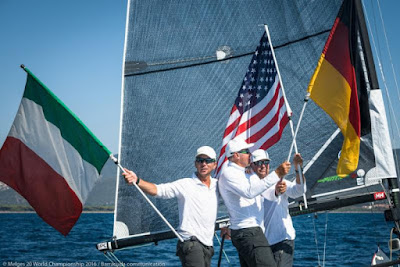 Scarlino, Italy - The last day of competition in Scarlino came to a dramatic close with two final races and Michael Illbruck on Pinta with tactician John Kostecki, and crew Federico Michetti becoming the 2016 Melges 20 World Champions! Hosted by Marina di Scarlino/Club Nautico Scarlino, the World Championship was the most successful to date featuring four days of incredible sportboat racing, at a stunning venue and more than 200 happy sailors!

The final round of racing saw Illbruck and American Drew Freides on Pacific Yankee with Morgan Reeser calling tactics and Charlie Smythe on the bow, separated by only three points, advantage Freides. Although not a simple task, Freides aimed to keep Illbruck behind him, or at minimum out of top nine ranking. With less than a minute to the nerve-racking start, Illbruck and Freides appeared to be over the line.
Illbruck however got away to the best pressured side, focusing mainly on the right in favor of a wind shift halfway up the course. Freides went left with his luck running out when he needed it most. His Race Eight result was his second disappointing finish of the day that ultimately served Illbruck well, advancing and overtaking for the big win.
"It's a fantastic feeling, a very important result that I dedicate to my father Willy who founded over 40 years ago and built, success after success the story of Pinta, which continues today on the Melges 20," said a joyful Illbruck post racing. "For us, this first season of racing with the Melges 20 was to be just one step closer to the goal we set ourselves, that is the World Cup in 2017 in Newport, but we worked hard and now we can celebrate this incredible achievement today."
"It was a tough race and we knew that Pacific Yankee would come looking for us," said Pinta tactician John Kostecki. "Michael did well to defend himself, and always lead to maximizing our boat speed. For me, to win with the Pinta Team has always been very special. I've been part of this team since 1994, and today is a day of great happiness for me and for all the Illbruck family."
Poland's Krzysztof Krempec on Mag Tiny ends the event in third overall. It was a memorable regatta for him and his crew of Tomislav Basic (tactician) and Ivan Ivankovic to say the least. Krempec was the only other boat other than newly crowned World Champion Illbruck to collect more than one bullet this week.
Liam Kilroy on Wildman came back to the course today with a strong performance to end it all in fourth, while Achille Onorato's Mascalzone Latino Jr. rounded out the top five.
In the all-amatuer Corinthian division, the World title goes to Emanuele Savoini at the helm of Evinrude. He and his young team - Enzio Savoini, Marco Giannini, and Giovanna Massidda are the winners. Their eleventh place finish today in Race Eight elevated them into first place overall. Cesar Gomes Neto at the helm of Portobello finished second, followed by overnight leader and tough competitor Mirko Bargolini on Spirit of Nerina in third.
ENDLESS THANKS
Very special thanks to every competitor who traveled to participate at Worlds. It was you that made this event so great and unique! A very special thanks also to Club Nautico Scarlino and to Marina di Scarlino for the great hospitality, and especially to our partners Helly Hansen and Barracuda Communications.
MEDIA AND RACING COVERAGE
Relive the excitement of the 2016 Melges 20 World Championship by visiting the Event Online Media Centre. Hot links are provided to every facet of media coverage. From the play-by-play, real-time posts on the Official Melges 20 Facebook Page, 3-D Tracking and Live Streaming Video, to full race reports, press releases and photos, check out this one-stop shop for coverage of the 2016 Melges 20 World Championship.
TOP TEN RESULTS (FINAL- After Eight Races, One Discard)
1.) Michael Illbruck, Pinta; 7-1-1-6-5-[32]-5-2 = 27
2.) Drew Freides, Pacific Yankee; 6-2-5-4-2-3-12-[39] = 34
3.) Krzysztof Krempec, Mag Tiny; 12-5-3-[40]-22-2-1-1 = 46
4.) Liam Kilroy, Wildman; 13-4-22-1-3-[51]-3-5 = 51
5.) Achille Onorato, Mascalzone Latino, Jr.; 4-6-9-3-[40]-4-8-26 = 60
6.) Rob Wilber, Cinghiale; 9-16-4-25-1-12-13-[35] = 80
7.) Guido Miani, Out of Reach; 18-23-2-15-11-11-[29]-9 = 88
8.) Alessandro Rombelli, STIG; 25-18-6-2-19-8-[26]-13 = 91
9.) Richard Davies, Section 16; 16-12-11-11-18-10-[43]-15 = 93
10.) Igor Rytov, Russian Bogatyrs; 1-30-15-22-27-[34]-6-3 = 104
View Full Results