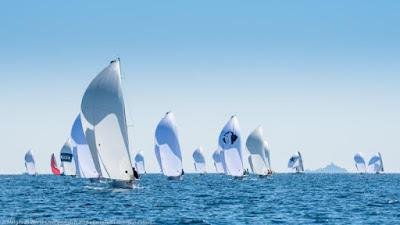 A single race is all the light and shifty breeze would allow for on Day Three, Freides keeps the lead and extends ever so slightly, Bargolini regains Corinthian lead.
Scarlino, Italy - The one and only race that was able to take place at the 2016 Melges 20 World Championship hosted by Marina di Scarlino/Club Nautico Scarlino was a difficult one at best, however managed to present some nice new faces at the front of the fleet.

The light breeze of 6-7 knots at 220 degrees really took its toll on some teams, for others it was a stroke of brilliance. Race Six gave way to a big win for Russia's Alexander Novoselov aboard Victor. His wire-to-wire win was impressive to say the least as Poland's Krzysztof Krempec on Mag Tiny also earned an outstanding result by chasing Novoselov at every turn. Current World Championship leader Drew Freides on Pacific Yankee chased their every move.
A big shift at the second upwind mark offered no interruption to Novoselov's lead, giving him complete control and ultimately taking the win. Krempec was second, then Friedes followed by Achille Onorato's Mascalzone Latino Jr. and Filippo Pacinotti's Brontolo Sailing Squadron finished fourth and fifth respectively. Manlio Carlo Soldani on For Sale came sixth, his best finish of the regatta.
So, Freides with a third place finish in Race Six keeps the lead and extends his position by a couple of points as we anticipate the final day of competition taking place on Sunday.
Illbruck, finished deep but is steadfast in second place, all thanks to discards going into play.
Onorato's daily fourth and his discard puts him back in the hunt back at third overall.
Rob Wilber on Cinghiale remains in fourth, and for Liam Kilroy on Wildman a difficult day indeed. He stays in fifth after a collision at the start with subsequent penalties.
In less than 24 hours we will know who is the next, new Melges 20 World Champion will be. More light breeze is in the forecast for the final day of racing.
CORINTHIAN HEAT

Things are very intense in the Corinthian division as Mirko Bargolini on Spirit of Nerina has regained the lead, with lady helm Marina Kaverzina on Marussia moving up into second. Overnight leader Emanuele Savoini on Evinrude experienced a tougher day sliding back to third. The same was true for Cesar Gomes Neto on Portobello who is fourth going into the final day. Johannes Lind-Windstam on Intermezzo rounds out the top five thanks to a nice top-twenty finish in today's light air challenging conditions.
MEDIA AND RACING COVERAGE

As with other Melges 20 events in Europe and around the world, World Championship racing updates will be posted online at the Official Melges 20 Facebook Page.
Throughout the event, everyone is encouraged to follow the racing via Live, 3-D Tracking with Live Streaming Video after each day featuring interviews and warm comments by competing teams.
Race reports, press releases and photos will be made available online each day post racing at melges20.com.
TOP TEN RESULTS (PRELIMINARY - After Six Races, One Discard)