Changing of the Guard at Melges 20 Worlds, Freides Takes Over 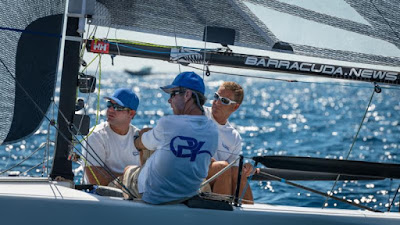 Scarlino, Italy - The second day of racing at the 2016 Melges 20 World Championship hosted by Marina di Scarlino/Club Nautico Scarlino featured two races under shifty conditions, shaking up the standings and making Drew Freides' Pacific Yankee the new leader with a one point advantage over Michael Illbruck on Pinta now seated in second place.

"It was a very difficult day, in which we made some very good tactical choices and we had luck on our side too," said Freides. "We are only at the halfway mark in the regatta, so we must remain focused on sailing just like we've been doing over the last two days. We need to make every race count because the game here is very complicated, and of course nothing is really decided until the very end."
From two perspectives, Freides and Illbruck have separated themselves from the rest of the fleet. First, they are the only two teams to have have maintained a solid single-digit scoreline thus far and second, by doing so they have extended their lead by twenty-three points.
It was moving day for Liam Kilroy on Wildman as he leaped eight positions from eleventh overnight to now sit third - special thanks to an amazing first place finish in Race Four. Alessandro Rombelli's STIG battled hard to end up second, helping his effort of breaking into the overall top ten, and Achille Onorato's Mascalzone Latino Jr. captured third.
Rob Wilber's Cinghiale delivered another great performance in Race Five coming on strong to take the bullet, Freides was second and again, the younger Kilroy took third.
Tomorrow marks the third day of competition and the forecast is calling for more light air conditions. If this happens, it could potentially reduce the number of trials that can be held, resulting in fewer opportunities to catch the front runners still in hot pursuit of the World Championship title.
CORINTHIAN CHUTES & LADDERS
In addition to the overalls, the Corinthian division also had a change in leadership. Emanuele Savoini helming Evinrude has moved into the lead, while Mirko Bargolini's Spirit of Nerina slips to second place. Cesar Gomes Neto at the helm of Portobello remains in third. Two out of several lady helms competing in the fleet complete the top five. Russia's Marina Kaverzina on Marussia and Wilma Homann on Fantastichina are fourth and fifth respectively.
MEDIA AND RACING COVERAGE
As with other Melges 20 events in Europe and around the world, World Championship racing updates will be posted online at the Official Melges 20 Facebook Page.
Throughout the event, everyone is encouraged to follow the racing via Live, 3-D Tracking with Live Streaming Video after each day featuring interviews and warm comments by competing teams.
Race reports, press releases and photos will be made available online each day post racing at melges20.com.
TOP TEN RESULTS (PRELIMINARY - After Five Races)
1.) Drew Freides, Pacific Yankee; 6-2-5-4-2 = 19
2.) Michael Illbruck, Pinta; 7-1-1-6-5 = 20
3.) Liam Kilroy, Wildman; 13-4-22-1-3 = 43
4.) Rob Wilber, Cinghiale; 9-16-4-25-1 = 55
5.) John Kilroy Jr., Samba Pa Ti; 2-11-10-7-30 = 60
6.) Achille Onorato, Mascalzone Latino, Jr.; 4-6-9-3-41 = 63
7.) Richard Davies, Section 16; 16-12-11-11-18 = 68
8.) Guido Miani, Out of Reach; 18-23-2-15-11 = 69
9.) Alessandro Rombelli, STIG; 25-18-6-2-19 = 70
10.) Dario Levi, Fremito D'Arja; 11-13-30-17-6 = 77
View Full Results
Visit the Official Yachtscoring Event Website
View Crew List