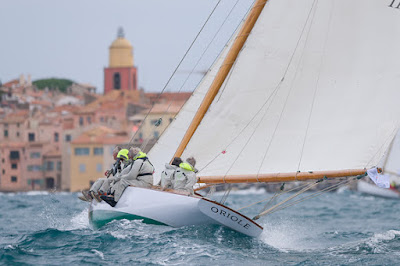 In two months' time, some of the most fascinating old ladies of the classic yachting circuit will reunite again for the Gstaad Yacht Club Centenary Trophy.   The regatta, unique in its genre, is reserved to boats that are one hundred or more years old and in 2016 will celebrate its sixth edition anniversary. Over the years, the Centenary trophy has gathered some of the most gorgeous and best performing classic yachts from the past century.


The event, raced in a pursuit format with staggered starts, is scheduled for Thursday, September 29th and is expected to be yet again the focal point of classic racing at the Voiles de Saint-Tropez.
"More and more one hundred year old yachts, owners and crews are showing a keen interest in participating to the sixth edition of the Centenary Trophy - and we are looking forward to welcoming them in Saint-Tropez for what we hope will be another memorable day of racing, fun and passion for these beauties." declared Peter Erzberger, Commodore of the Gstaad Yacht Club.
The Centenary Trophy features an especially created and constantly refined handicap system, allowing very different boats in size and rig to compete on equal terms, and its format has proved extremely attractive for the sailors and the public alike, with the first boat to cross the line off the St Tropez breakwater to be declared the winner.
For the 2016 edition, the organizers are expecting to record some 20 to 25 boats on the starting line, including aficionados like Lulu, Marigold, Nin or Owl; past winners like Oriole and Olympian and some "rookies", like the NYYC 50' class Spartan, dating from 1913 and racing for the very first season in the Mediterranean.
Past winners of the Centenary Trophy
2011: Bonafide (1899)
2012: Marigold (1892)
2013: due to adverse weather conditions the race could not be sailed and the title was not awarded
2014: Olympian (1913)
2015: Oriole (1905)
Gstaad Yacht Club organizes the Centenary Trophy in co-operation with the Société Nautique de Saint-Tropez.