52 SUPER SERIES - SCARLINO CUP ON THE EVE OF THE FINAL DAY, BRONENOSEC GAZPROM IS STILL FIGHTING 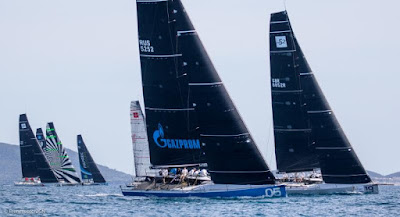 Scarlino, May 28 2016 - In the penultimate day of Scarlino Cup, opening event of the 52 Super Series 2016, it was held just one race in light and shifty breeze blowing from west-southwest. The race was won by Sled (Okura-MacDonald, 1), with the leader of the provisional standing, Quantum Racing (Baird-Hutchinson, 4), who has obtained another top five results, useful to confirm itself at the top of the ranking with four points margin on Platoon (Muller Spreer-Wieser, 2).

Bronenosec Gazprom (Ivaldi-Liubomirov, 9) had a not easy day and has struggled to emerge from the center of the fleet, ending the sixth race of the series in ninth position, between Ran racing (Zennstrom-Reeser, 8) and Provezza (Beadsworth-Ray, 10).

"It was a tough race, a classic example of 'rooster one day, feather duster the next' - Bronenosec Sailing Team's pitman Andy Fethers explained few minutes after the dock in - Yesterday we were confident in the coastal race and today a massive and persistent right shift found us on the left of the race course and really struggling to get any points we could. But, as you know, here we have an impressive line up of sailing equipments and if you made something wrong, it hurts. But, with three more races to go, we are still in play and we can still fight for the podium".

As Andy Fethers said, Scarlino Cup will end tomorrow with the opportunity to have three more races. First warning signal is set for 12PM with some good southerly breeze expected on the Follonica Gulf.

The event can be followed through the official website: http://www.52superseries.com/. To be updated on the Bronenosec Sailing Team news just surf the official Bronenosec Gazprom TP52 Facebook page: https://www.facebook.com/bronenosecsailingteam/.