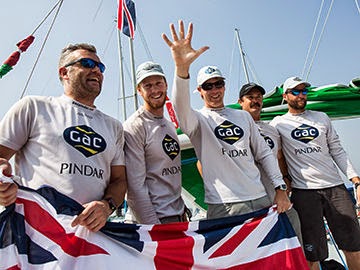 The GAC Pindar skipper, who became a father three months ago, could scarcely grasp the enormity of his achievement. He has become the most successful match racing helmsman of all time, and he is the only skipper ever to have won three Monsoon Cups, the final event on the Alpari World Match Racing Tour. "It really is a dream come true. When I started sailing full time, giving up my job as a lawyer, I was hoping to win one world championship one day, so to win five is incredible.


"I can't say enough about the great job these guys did on board today. I'd like to thank the crew for what has been an incredible effort over the 2014/15 season. We've worked incredibly well as a team over the year and it really is an honour to sail with them." Williams is crewed by Gerry Mitchell (mainsheet), Mal Parker (trimmer), Chris Main (pit and tactics) and Graeme Spence (bowman).
The GAC Pindar crew started the day by winning a third and decisive match over Wild Card entry Eric Monnin (SUI). A ticket to the Finals was sufficient to give Williams his fifth world title. Aged 37, Williams won his first World Championship in 2007, and added three more titles in 2008, 2011 and 2012, when he drew level with Australian sailor Peter Gilmour with four titles.
In the other Semi Final, defending World Champion Taylor Canfield (ISV) took a vital point in his match against Mathieu Richard (FRA) to take the score to 1-2. The US One skipper dominated the French Lunajets team at the start, getting a penalty against Richard. When Richard picked up two more penalties at the leeward gate, he was black flagged by the umpires and the match was awarded to Canfield. Perhaps the tide was turning in US One's favour, but no, Richard accelerated with more speed off the next start and controlled the match all the way to the finish to win 3-1 and book his way to the Final against Williams.
The Petit Final was Canfield's final shot at redemption, and this time he didn't falter, beating Monnin 2-0 in the light airs to secure 3rd place in the Monsoon Cup and 2nd overall in the Tour season standings.
The wind remained disappointingly light for the Final, after a good week of breeze in Johor Bahru, a new venue for the Monsoon Cup. It didn't matter what tricks the wind decided to play, however. Whatever he was given, Williams was the master of time, distance and control in the pre-starts. Richard had no answer as he was boxed out of the first two starts by the British crew and found no way back into those matches. Even in the third match, when Richard finally found some clear air off the right-hand end of the line, Williams found the better breeze and raced away to an unassailable lead. Another 3-0 victory for GAC Pindar who won 19 of their 20 matches in the often fickle conditions of Johor Bahru.
"To go 19-1 for the regatta, I couldn't be happier with that performance. The guys did just a great job, with the starts and picking the wind shifts," said Williams, reflecting on an incredible Tour season. "We've made six finals out of seven, and as we've matured we've learned the game more and more. I feel our systems and the processes have really come together at this regatta and the team has been as strong as it's ever been. I think Johor Bahru has been a great venue for the Monsoon Cup. The racing has been challenging, tricky, and you could never be comfortable even when you were leading. It makes for really interesting racing. A fantastic sailing venue."
Williams' tactician Chris Main started the day with a 'Magnum' moustache, winning the Semi-Finals with his face furniture still attached. Come the afternoon for the Final, however, and the moustache was gone. "Chris Main is a law unto himself," sighed Williams, shaking his head. "But I don't think Chris had fully thought through the consequences. If we had lost the Final, then Chris would have had to have regrown that moustache and kept it for the rest of his sailing career!"
At the prize giving ceremony on the gardens of the brand new Country Garden Danga Bay resort, His Royal Highness Sultan Ibrahim Ismail Ibni Almarhum Sultan Iskandar presented the Garrard-designed World Match Racing Tour Championship Trophy to Williams and his crew. Also in attendance was His Highness Tunku Abdul Jalil Ibni Sultan Ibrahim Ismail and Minister of Youth & Sports, YB Khairy Jamaluddin.
From a total prize purse of US$500,000 for the Alpari World Match Racing Tour, Williams' season victory earns him US$100,000. He also receives 310,000 Malaysian Ringgits (approx US$86,000) for his Monsoon Cup victory. After finishing runner-up at the Monsoon Cup, Richard finished 3rd overall in the Tour standings behind Williams and Canfield.
Now the teams have a few months to regroup and reset their goals in preparation for the Congressional Cup in California this May, the first event of the World Match Racing Tour 2015.
2015 Monsoon Cup Malaysia Stage 7 - Season Finale 2014/15 Alpari World Match Racing Tour
2014/15 FINAL Leaderboard Standings
1 Ian Williams (GBR) GAC Pindar 132pts
2 Taylor Canfield (ISV) US One 116pts
3 Mathieu Richard (FRA) LunaJets 109pts
4 Phil Robertson (NZL) WAKA Racing 77pts
5 Björn Hansen (SWE) Hansen Sailing Team 75pts
6 Keith Swinton (AUS) Team Alpari FX 73pts
7 Eric Monnin (SUI) Team SailBox 56pts
8 David Gilmour (AUS) Team Gilmour 51pts
Overall results of Monsoon Cup, Alpari World Match Racing Tour
1 Ian Williams (GBR) GAC Pindar
2 Mathieu Richard (FRA) LunaJets
3 Taylor Canfield (ISV) US One
4 Eric Monnin (SUI) Team SailBox
5 Phil Robertson (NZL) WAKA Racing
6 Pierre-Antoine Morvan (FRA) Vannes Agglo Sailing Team
7 Keith Swinton (AUS) Team Alpari FX
8 David Gilmour (AUS) Team Gilmour
9 Björn Hansen (SWE) Hansen Sailing Team
10 Johnie Berntsson (SWE) Stena Sailing Team
11 Maximilian Soh (SIN) Team Red Dot
12 Jeremy Koo (MAS) Sime Darby Foundation / 1 Malaysia Match Racing Team