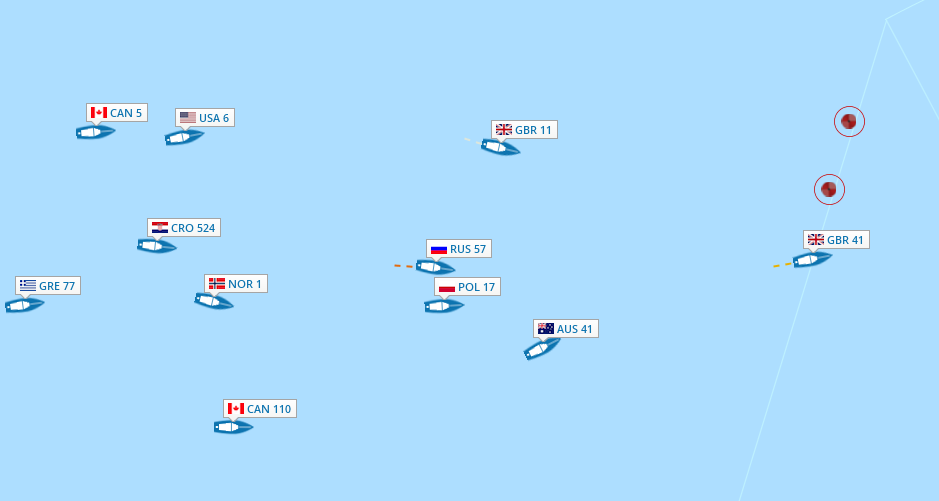 Giles Scott (GBR) said last week that he hoped his unbeaten run would continue, and based on Monday’s form at the Sailing World Cup Miami, the 2014 World and European Champion is giving it a pretty good shot, with two race wins leading from the front. Jake Lilley (AUS) is second with Ivan Kljakovic Gaspic (CRO) in third.   The first day of the first Sailing World Cup of 2015 brought testing conditions with a shifty, offshore wind of 16-23 knots with squalls up to 30 knots, together with both rain and sunshine.


After a delay to the start, race 1 got underway in 16-18 knots from the west.  Ed Wright (GBR) and Giles Scott (GBR) emerged from the middle of the first beat to round just ahead of Piotr Kula (POL) at the top mark. Wright soon gybed back to the left, but Scott carried on and soon took the lead. He extended at the gate and maintained his lead on the second beat before turning it on downwind to build a 150 metre lead at the finish to win the opening race. Jake Lilley (AUS), who rounded the top mark in 11th, made gains each leg to move up to second on the final downwind. Wright crossed in third with Kula fourth.

With the wind increasing Lilley capitalised on his good form to lead round the top mark in race 2, just ahead of Scott and Ioannis Mitakis (GRE). Ivan Kljakovic Gaspic (CRO) wasn’t far behind and had moved up level with Scott at the gate, the two sailors rounding opposite marks. After a long port tack from the bottom of the course, Scott had gained a slight advantage and rounded the top mark just five boatlengths ahead of the Croatian. Lilley had slipped to third.

On the final downwind it looked like Scott would sail away to another big win, quickly opening up a gap of 80 metres on the fleet. However as the groups on the left and the right converged on the finish his lead evaporated, though Scott still managed cross first from Kljakovic Gaspic and Lilley.

Lilley said, “It was a classic windy westerly frontal passage, 18-30 knots and shifting from 275 to 305 degrees. The forecast was for it to clock right after the front passed but it swung back to the left more then most expected. The windward mark was near the shore and current played into the mix.  We came here to work on light air speed, which we hope to see later this week, but I’m happy doing well tactically today in the shifty conditions.”

Scott said of his day, “It was very windy, offshore and shifty today. The wind was oscillating around about 30 degrees with big bands of pressure. If you got caught out in a lull it really wasn't great. Also, there were no waves, but a hideous chop in the second race; it really bounced you around.”

Scott is clearly the favourite here, having been unbeaten in the class for 18 months. “People often ask me about my form, having had such a good year in the Finn last year.  Of course I am really pleased how it all went - it was great to become World Champion again and to have been able to go last year unbeaten, but ultimately it kind of means nothing really at this stage.  It’s about what comes next.”

“For me it’s very much still one step at a time in terms of the approach to events, but you have to be realistic about the fact that you have to qualify for the Games.”

His unbeaten run also included last year’s SWC Miami, where he only just overcame Oliver Tweddell (AUS) in the final race. “Miami as an event went pretty well for me last year, although we did struggle with the wind a little bit. It’s generally a good regatta to do and a good start to the competitive year.”

Racing in Miami continues through for Friday for the opening series, with the medal race for the top 10 on Saturday. The first start for Finns on Tuesday is scheduled for 13.00.