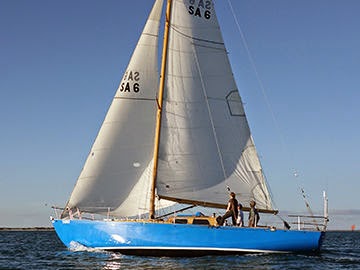 When the cannon fires sending the 118 entries on their way in the Cruising Yacht Club of Australia's 70th Sydney Hobart Yacht Race on December 26, two yachts will stand out, because they first competed back in the early days of the race. There is plenty of nostalgia to this year's Rolex Sydney Hobart, abetted by Southern Myth and Landfall, who sailed the race in the 1950's and 1960's.  Peter Riddell's Southern Myth is a 12.5 metre Bermudan sloop designed by Laurent Giles and built by R. T. Searles of Adelaide in 1953. She was commissioned by Norm Howard from Adelaide, who contested the Hobart race from 1954-1965, only missing the 1964 race.

She finished fifth in her maiden race and scored a best result of third overall in 1958.
Not only was the race difficult, it was a big effort by Howard and crew to sail the boat to Sydney. In those days, it took a minimum six weeks for the round trip from Adelaide to Sydney, Hobart and back home. Considering the time and effort required, it is amazing they made it to the start, let alone finish all races, but they were made of stern stuff in those days.
Sir James Hardy recollected his first Hobart aboard Southern Myth - and his first delivery from South Australia to contest the race, "The thing that stands out is we used to toss a coin or cigarette pack and the loser had to climb to the transom to read the Walker log - it wasn't fun. We used to do that every half hour - it was the hardest job, but Norm Howard insisted.

"The Walker log was connected to a cord with a thing that looked like a torpedo on the end - I guess most offshore boats had it in those days. Norm used to navigate. We had terrible headwinds on the trip to Sydney and he got horribly seasick, but he never hit a thing and kept up his end of the deal."
Sir James also remembered the yacht bore the first Terylene sails seen in Australia. "It was the beginning of sails being made from polyester in Australia," he said. "I'm glad the boat is returning for the 70th race, that's special."
The boat still lives in Adelaide not far from her owner Peter Riddell. "I've been sailing on Southern Myth since I was 14 when Norm owned it. I took it when it was going to be scuttled. There was too much history, the boat had to be preserved," the 61 year-old said from Portland, where he was waiting for a good weather window to leave for Sydney.
"We tried to keep the boat as close as possible to its original form, but it had fallen into major disrepair, so it had to be modernized when we rebuilt it," said Riddell who explained, "We're doing the race because the boat is 60, it will be her 15th Hobart and this is the 70th race."
As far as the race goes, Riddell says, "The aim is to look after the crew and finish the race, because the boat has finished every Hobart it has competed in, so we will sail safely, not push it too hard. The boat will do best upwind, that's what the older boats are good for."
Michael Strong's 13.4 metre S&S design number 54, is even older. Built in 1935, Landfall can boast being the oldest lady in the fleet that has previously contested the Sydney Hobart. She finished seventh overall in 1952, returning for her 40th birthday in 1976 to finish mid-fleet.
"We've brought her back to celebrate her 80th birthday and the 70th Hobart," Strong says. "It's great the CYCA recognises older boats and is supporting them with the Corinthian division."
She is the first Sparkman & Stephens design built outside the USA and is a one-off. Strong is proud of his pretty timber boat, "She was originally a Yawl and was built in Tasmania of Huon Pine. She still has the original copper nails. The boat has been checked over and is still in beautiful condition."
Strong has owned her for 20 years and converted her to a sloop. He had sails made to suit, but the rest remains as was, and has hopes of doing well in the 628 nautical mile race.
"This is my first Hobart, but my crew has done a few. We're going to go out there and give everyone a caning," he jokes. "Seriously, we'd love to do well, and we'll be trying our best."
Landfall was the beginning of the S&S dominance on the world stage, winning seven Hobart races overall. Most famous were Morning Cloud (1969) owned by Edward Heath who was to became Prime Minister of the UK in 1970, and three-time winner Love & War (1974, 1978 and 2006) owned by Peter Kurts and after his passing, son Simon.
The design has also won line honours, most notably Jim Kilroy's Kialoa II from the USA in 1971 and in 1975, Kialoa III set a new record which she held until 1996, during which time she took line honours again, in 1977.
Still popular, there will be five S&S's this year, Landfall, Love & War, aiming for a record fourth overall win, Tina of Melbourne (Andy Doolan), Quikpoint Azzurro purchased and lovingly restored by Shane Kearns, and Ray White Spirit of Koomooloo (Mike Freebairn). Originally Ragamuffin, she was top Australian point scorer at the 1969 Admiral's Cup. (www.sailing.org)