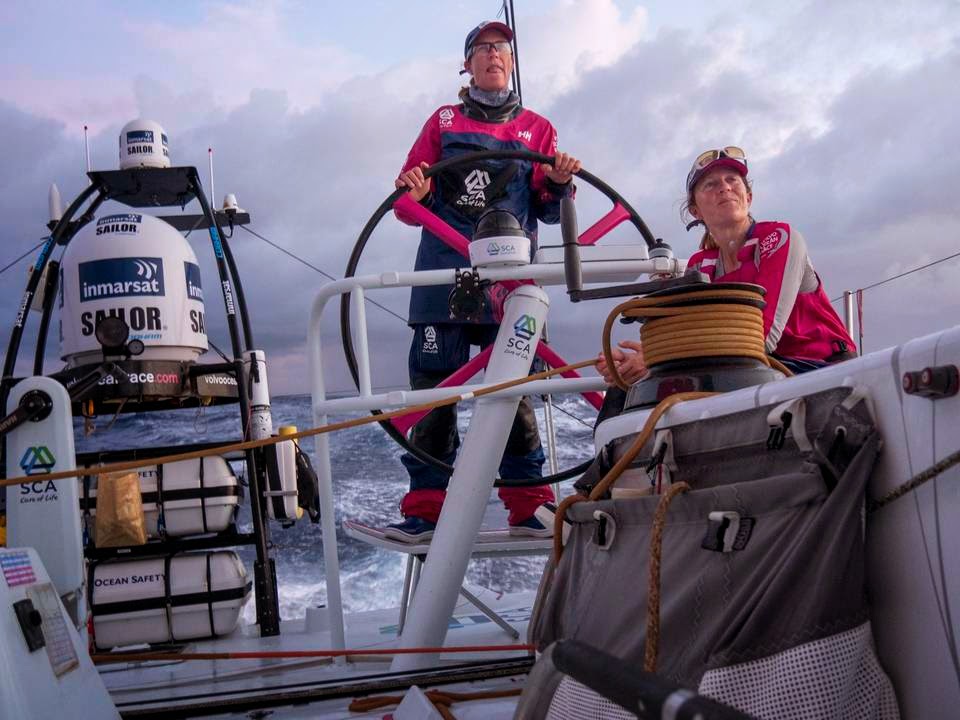 The water temperature is dropping. Yesterday, the girls were wearing hats with long flaps and covered in layers of Zinc. Today, the girls started the day in visors and ended in fleece-layered hats. It’s official: Southern Ocean is imminent.    We are still only at 20* South; we still have a few more miles between us and the big waves and the Albatross that make the Southern Ocean famous. But it’s coming, and we’re all sensing it. It’s a race to the South.    On board we have a few Southern Ocean veterans, and they’ve been a saving grace for us Southern Ocean newbies.


“I can’t help but laugh,” Sam said. “The girls who haven’t sailed in the Southern Ocean keep asking me all these questions, and I can’t help but remember that’s exactly what I did. I was lucky enough to have a very patient navigator—so I’ve been open to answering the questions.”
Sam was 22 when she first sailed in the Southern Ocean; she has since been back once in 2009 for the Vende Globe, when she spent six weeks down there. Abby sailed the Southern Ocean in her last Volvo Ocean Race in 2001-2002, as did Carolijn Brouwer. Liz Wardley last played in the Southern Ocean in 2007 when she was testing a one-design boat for an Around the World Race. Dee Caffari has been down there four times! That must be a good sign then!!!
All of us “newbies” want to know what to expect. What exactly have we signed up for? “Will it be like the Round Britain and Ireland Race?” is a common question. [In Round Britain and Ireland, Team SCA and four other VOR65s raced on the tails of Hurricane Bertha and experienced high sustained winds, cold water, and medium sized waves.] “Yeah, but it’s way cooler,” Liz said.
“I’ve always said that if it was warmer, say 20*C, then everyone would go there. It’s the best sailing conditions I’ve ever experienced,” Carolijn said.
“It’s like the Round Britain and Ireland but the waves are bigger and further apart. It’s colder too. And grey—there’s no sun,” Abby explained.
Entering the Southern Ocean and racing to Cape Town is not as easy as sailing a straight line South. Currently, we are heading west in order to catch a Low pressure that spinsa out of the South. To our East, we have the St. Helena High that pretty much stands between Cape Town and us—to get past it we have to go below it. By going south, we hook onto a Low and send it faster than fast, hopefully getting a speed record, and bee-line it for Cape Town.  (www.teamsca.com)