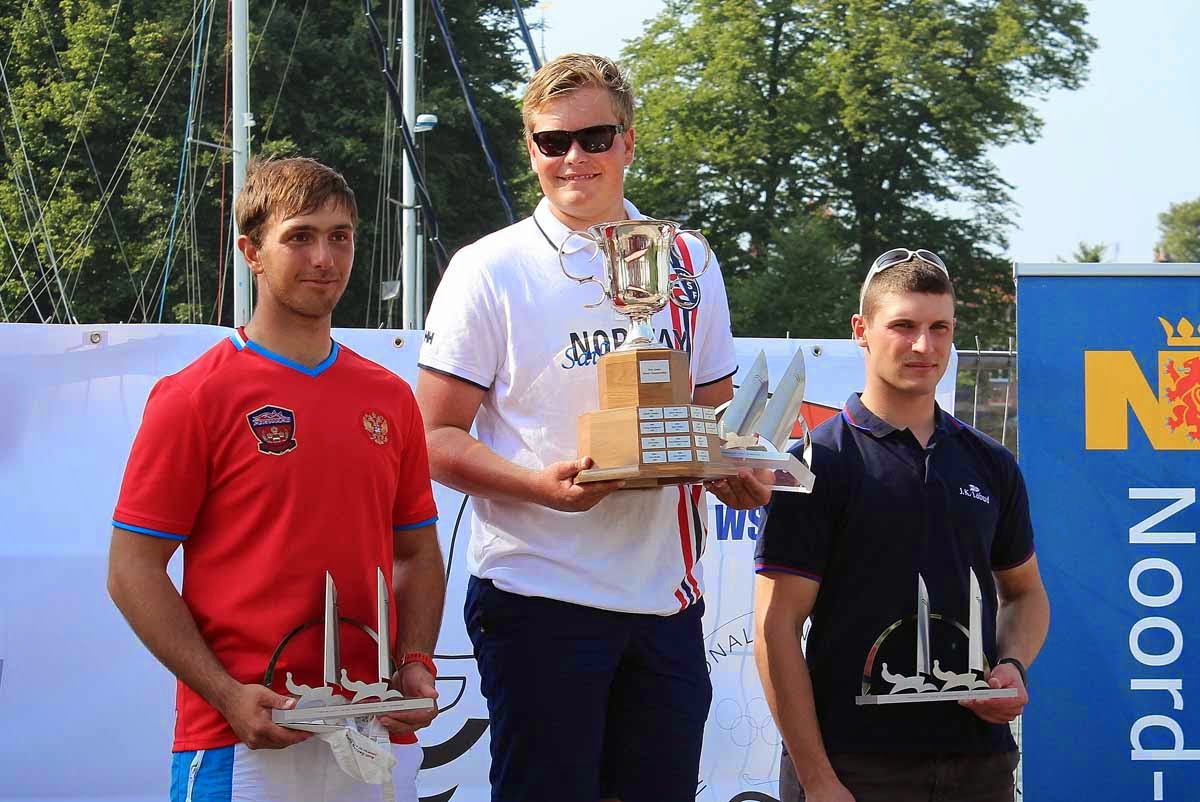 Anders Pedersen (NOR) has won his first ever Finn Silver Cup, and in his last year as a Junior, without any more races being held. Arkadiy Kistanov (RUS) took the silver and Nened Bugarin (CRO) took the bronze. For the third day in a row the 32 Finn sailors set out from Hoorn and came back with no more races sailed.  It was a day for ices, swimming and sunbathing but no racing. Everyone, well almost everyone, was willing it to happen, but it just wasn't to be. The sailors launched for a start at 11.05, and that got away on time in 5-6 knots. At the first mark Lars Johan Brodtkorb (NOR) led from Riccardo Bevilacqua (ITA) and Jeremi Zimny (POL). Zimny had taken the lead by the gate but the wind had almost gone by then and before the fleet had finished rounding the gate, the race had been abandoned.

Within the race, second overall Arkadiy Kistanov (RUS) was sticking to first overall Anders Pedersen (NOR) in an attempt to drag him back through the fleet. Pedersen already had a high score, so another would reduce his chances of winning. Kistanov did an almost perfect job, and controlled Pedersen out to the left from about half way up, before rounding the top mark about 15th, and several boats ahead of Pedersen. The battle continued downwind, with Kistanov taking the Norwegian all over the left side of the run. The tactic was working as they were both deep for a while and if this had been the only race Kistanov had given himself a good chance to win the title. The race abandonment saved Pedersen.


The fleet waited afloat for a further 90 minutes, including a welcome box of iced lollies brought from the shore for all competitors and race officials. The wind looked hopeful at one stage, but it soon vanished again leaving a glass-like sea. Finally at 14.00, with no wind developing, the race officer took the decision to end the waiting and abandoned all racing for the day. A cheer immediately went up from Pedersen who had achieved his goal of winning his first major Finn event.


The prizegiving took place at the harbour outside the sailing club on a beautiful evening.


Pedersen said of his win, “It feels very good. It's my third try to get the Silver Cup, so it's great. It means a lot to be Junior Champion in Norway and hopefully will make it easier to get funding or sponsorship.”


“I had a bit of a tough fight today with the Russian. He had a really good series with no bad races, so for him it didn't mean anything but for me I needed a good result. So he was giving me a hard time around the race course. I was glad when they abandoned it. It was obviously a good thing for me. I prefer more breezy conditions. I wish we'd had three races two days ago.”


Was he concerned about that situation? “You don't really have time to work it out in the race, you just try to do the job, but he gave me a hard time on the downwind as well but we gained on the fleet so I think we were back in the game at the gate. But I think I have to practice my match racing.”


Second placed Kistanov, the 2011 Junior World Champion, put on a great show today and had almost done enough to regain the title. “Today was a nice day but not so nice for sailing. My plan was really easy, to be three boats ahead of Anders or he must be seventh or later. So for me it was easy to just control him and not give him a chance to be in the front. And I did this before the race was abandoned.”


“I get practice doing that in races in Russia every month where I always do that on the last race, so I knew what I was doing.”


“We only raced three days, so I am a bit unhappy about that and Anders is a bit lucky, but that's competition, so congratulations to him. I thought that I could be first here so I'm not happy to just get the silver. But I still have two more more years to go so I will come to those Silver Cups and try to be better.”


“I only started in the Finn in January this year, so I am not so long in the class, so I can be happy with this result. I am training with Bambi [Ivan Kljakovic Gaspic (CRO)]. He is like my mentor, so he is helping me a lot. I am going to Santander next, but I will take a little rest now and then after that we will start preparation for Santander.”


“And I will be back next year to try again in Valencia.”


The sailors have been enchanted by the beauty of Hoorn this week. WSV Hoorn has an idyllic setting in a beautiful harbour, which was the starting point for many famous voyages and home to navigators in past centuries, when it was an important base for the Dutch East India Company. Vessels left Hoorn for exotic places worldwide to trade and bring back goods from far off places. The sailors have enjoyed exploring the town with its varied buildings, canals and back streets. Today the Finn sailors left themselves with their prizes, memories and the desire to do better next time. For some it was their last chance at the Silver Cup as they are now too old, but for the younger sailors, they are inspired to train harder to come back faster and better.