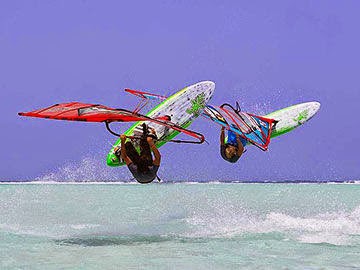 With winds lighter than the previous day the majority of sailors reached for their 4.8-5.2m's as they battled it out for the final time this week. Several sailors came storming back through the doubles but in the end no-one could stop Kiri Thode (Starboard / GA Sails) from fighting back to claim victory on his beloved Bonaire. Meanwhile, Sarah-Quita Offringa (Starboard / Mystic / Chris Benz / Maui Ultra Fins) claimed a throughly deserved victory in the women's, remaining unbeaten yet again, after a phenomenal display of sailing.

Winners' Final
Having defeated Steven Van Broeckhoven (JP / NeilPryde) and Amado Vrieswijk (Starboard / Severne), Jose 'Gollito' Estredo (Fanatic / North / MFC) was the only person standing in the way of Kiri Thode from claiming victory in the double elimination. In the winners' final the reigning PWA World Champion dominated against his five-time counterpart to force a super final - after landing huge one-handed air bobs, double culos and air bob culos to name just a few. You name it the Bonairean landed it.
Super Final
The super final proved to be a much tighter affair as Jose 'Gollito' Estredo found his form, however the Venezuelan was powerless to stop Thode storming to the top of not only the double elimination, but also the overall event rankings as the Bonairean claimed the first victory of the year. On his way to being crowned the King of Bonaire, Thode landed more trademark one-handed air bobs, crazy kabikuchis and an amazing one-handed air funnel into burner. Even a broken mast couldn't stop Thode - thanks to the instant response by his caddy. Gollito pushed Thode all the way as he also stomped a perfect double culo of his own, stylish skopus and an unbelievable no-handed burner. However, it wasn't enough for Estredo as Thode was awarded victory by way of a 2:1 decision.
Amado Vrieswijk claimed his first ever place on the prestigious podium having successfully defeated fellow Bonairean and friend Tonky Frans (Tabou / GA Sails) in the third place sail off.
Davy Scheffers (Tabou / GA Sails) was the main mover in the double elimination, as he recovered from an earlier than expected exit in the single. The Dutchman received a bye past the injured Tony Mottus (JP / NeilPryde) in the first round before defeating Choko Frans, Quincy Offringa (Starboard / MauiSails) and Hugo de Sousa (RRD / RRD / Maui Ultra Fins). Bjorn Saragoza (Starboard / Hot Sails Maui) also enjoyed a fine day with his victory over Youp Schmit (JP / Avanti) being the highlight, before Steven Van Broeckhoven proved too strong on this occasion.
Women's

Double Elimination II
Maikke Huvermann (Starboard / Severne / Maui Ultra Fins) fought her way back from fourth place by winning three heats in a row against Yoli de Brendt (Fanatic / North), Oda Johanne (Starboard / Severne / Maui Ultra Fins) and Arrianne Aukes (RRD / Simmer / Maui Ultra Fins) to progress into the winners' final.
Winners' Final
In the winners' final Sarah-Quita Offringa took on Maikke Huvermann for the second time. Huvermann had shown amazing consistency in her earlier heats and the sixteen year old produced a fine performance in the final as well. The reigning PWA Youth Freestyle World Champion landed a fantastic repertoire of moves such as flakas on both tacks, faultless punetas and a text-book funnel, she even came close to landing a switch chachoo. However, Offringa was at her brilliant, unbeatable, best yet again as she landed virtually any move she wanted. On her way to a comprehensive event victory the Queen of Freestyle exploded through fantastic funnels, superb shakas and new school power moves such as regular konos and an outrageous culo.
Bonaire produced four unbelievable days of freestyle out of five and will go down as one of the best freestyle events in the history of the PWA - with the action on the water reaching incomparable heights from what we have seen before. The final day was concluded with a vibrant closing ceremony representing the true culture of the Caribbean. (www.sailing.org)