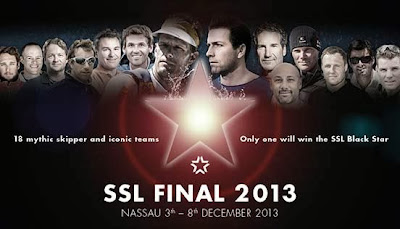 The first Star Sailors League Final taking place in Nassau next week will not miss the significant contribution for sailing made by Great Britain with their heavyweight Edward Wright. He is a strong and talented sailor who has spent most of his time in Olympic classes, from Laser to Finn, where he earned the Bronze at the 2006 Finn World Championships. His crew will be Petter Mørland Pedersen from Norway, unable to sail with his usual skipper Melleby.


Wright's passion about all aspects of training is evidenced by his unparalleled fitness and precise technique, These have resulted in his major career highlights, which include winning the European and World Championships, as well as the ISAF World Cup. In recognition of his outstanding performances in 2010, Wright was nominated for the ISAF Rolex World Sailor Award, followed by receiving The British Olympic Association's Athlete of the Year Award.
What distinguishes Wright from other sailors is his devotion to achieving superb physical fitness. Whereas other sailors opt for a more specialized approach to attain the conditioning necessary to face Finn sailing's demanding conditions, Wright takes a holistic approach to training. This sailor is known for subjecting himself to rigorous and dynamic workout routines that focus on maximizing mobility, strength, power and endurance. Wright's natural athleticism and dedication to high intensity training has made him one of the world's fittest sailors.
New to the Star Class, the Brit expresses huge enthusiasm for this upcoming event: "It's a great idea. I wish all the other olympic classes would do the same. I really love it because there are so many legends in the sport and the Star brings them together in the League." And even if Wright has no experience with this boat, he doesn't renounce to be amongst the best: "Since it's a competition, I want to win it, so let's see how it goes".
His teammate Petter Mørland Pedersen is a sailor from Oslo, Norway. He has been sailing competitively since 2006, mainly in the Star Class. His achievements include 4th place in the 2012 London Olympic games, two bronze medals in the Star European Championship, ranked 1st on the ISAF World Ranking (Star) in the Olympic year 2012, overall ISAF World Cup Winner in 2010, including several individual wins and numerous National titles, most in Match Racing (as skipper), and several other medals from various classes.
A real Star protagonist and a flagship for his country, Pedersen has spent his career in conquering and defending the honor of his favorite class, as he will do again next week: "I think it's a superb initiative to still keep good pace in a beautiful class like the Star. Even though it is "slow" and "boring" it still attracts the best sailors, which shows what an interesting and challenging boat it is to sail. Since both Eivind Melleby and I have lost a lot of weight since the Games, we will unfortunately not sail together here in Nassau. I am very glad to have the opportunity to team up with Ed who is a brilliant sailor. He is also a first timer in the Star, so if we get the technical part sorted out during our few days of training, I do believe we can be an underdog. It has been shown before that new sailors in the class can do well right away, before they start digging deep into the mystery of Star tuning. We will be provided with a boat and sails, so my goal is to set up the boat as perfectly as possible: let me handle the boat, and have Ed focusing on what's happening on the water. Our advantage can be our fresh eyes back in the boat not trying to remember all tuning notes from the games."