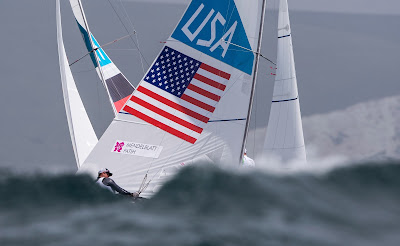 Nassau (Bahamas), 23 November 2013 - With the highest number of sailors ranked in the Star Sailors League (551), America will have the largest number of competitors taking part in the inaugural Star Sailors League Final, hosted by the Nassau Yacht Club, 3-8 December. Mark Mendelblatt (15th) with Brian Fatih (13rd) are the SSL Ranking leader in the stars and stripes contingent. They will fight hard against fellow American and former Star World Champion, George Szabo (19th) who will be racing with Craig Moss (29th), and Augie Diaz (16th) together with John von Schwarz (15th). These three well known teams will also face two unexpected wild-card entries: the youngest in the SSL Final fleet, Tomas Hornos (39th) with his crew Joshua Revkin (138th), and the sailing celebrity Paul Cayard together with Austin Sperry (37th). Mark Strube (32th) will be crewing for Eivind Melleby.


Mark Mendelblatt, has an enviable racing record in small boats and Olympic classes and a triumph in the Louis Vuitton Cup in 2007, aboard Emirates Team New Zealand as strategist. However, Mark is still very much in love with the Star: he demonstrated it winning the 86th edition of the prestigious Bacardi Cup in Miami, ahead of Star legends, Lars Grael and Xavier Rohart. You can feel his commitment to this class in his words: "It is very nice to be able to still sail the Star at the highest level, even though we are no longer an Olympic class. The system of using all Star regattas around the world to determine the rankings, then having the grand final, is a great way of bringing the top sailors together each year."
Paul Cayard spent the most of his career in America's Cup, olympic games campaign and multiple round the world race, but the Star class has been a lifelong passion for him. Of all his sailing accomplishments, he counts his 1988 Star Class World championship, as his most prized victory. More recently Cayard represented USA in the Star Class for the 2004 Athens Olympic Games. Cayard also approved the whole format of the Star Sailors League: "I think it is a fantastic agenda and if there is one class in our sport that should host the "Masters" each year it is the Star Class."
George Szabo, former Star World Champion, can't wait to sail again in the beautiful scenery of the Bahamas: "Nassau is one of the best sailing racetracks in the world. If you like skiing moguls, you will love sailing there. The waves, scenery, people, and sailing are just fantastic."
This unique event, chock full of champions, is also a rare opportunity for a promising young Tomas Hornos, former Snipe World Champion, to emerge among the sailing aces: "I'm currently sailing Stars, Etchells and J70s. I think the SSL Final will be extremely competitive and with the new format it will be exciting to see how the last day unfolds. My goal is to take advantage of this opportunity and learn as much as I can from the really talented group of sailors gathered."