First ever Star Sailors League Finals to be held in Nassau: Scheidt and Cayard just two of the champions competing 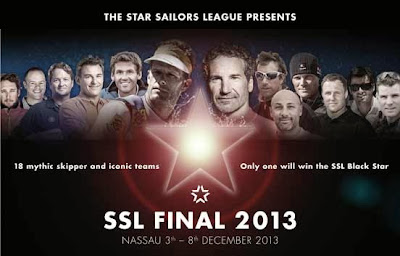 Nassau Bahamas, October 30th 2013 - The Star Sailors League (SSL) is proud to announce its first ever event: the 2013 SSL Final. The invitational event will be held at the Nassau Yacht Club from December 3rd to December 8th, 2013, with the best Star sailors from 11 countries competing. Most of the leaders in the SSL Ranking list have already confirmed their participation - Robert Scheidt (BRA), Xavier Rohart (FRA), Freddy Loof (SWE), Eivind Melleby (NOR), Michael Hestbaek (DEN), Flavio Marazzi (SUI), Johannes Polgar (GER), Robert Stanjek (GER), Mateusz Kusznierewicz (POL), George Szabo (USA) and Diego Negri (ITA). Also confirmed is Paul Cayard (USA), long time Star sailor and 1992 Louis Vuitton Cup Winner, who will compete as a welcome guest. Further participants will be confirmed.
Legendary champions
The provisional entry list, which includes three Olympic Gold Medallists, 11 Olympic Class World Champions and a Louis Vuitton Cup winner, represent the first and the only time after the Star Worlds and 2012 Olympic Games that so many international Star champions will race together.
New format
This event will also be the first Star event with the new race format - for all 18 boats, regatta style racing for three days, with no more than four races per day and a maximum of nine races in all - followed by an innovative fourth day: the top ten from the previous days will compete in the three final races with a progressive drop-out of three boats per session. So the last day of racing will begin with ten boats in the quarter final, seven in the semi-final and only four in the final. The overall winner of the event will be the team that first crosses the line in the final race, and will receive 4,000 SSL points.
Impressive prize money
In this debut event, USD 200,000 will be awarded in prize money, to be divided amongst the whole fleet. Prizes also include the Best Skipper of the Year award, while the Best Crew of the Year will receive the first "Simpson Memorial Trophy", in memory of British Star sailor Andrew Simpson.
Live 3D coverage and virtual gaming
All races will be broadcast live on the official website www.starsailors.com with Virtual Eye technology, the same tracking that was used during the recent America’s Cup. Virtual engaging doesn't stop here: Sailors from all over the world will be invited to “play” the Star Sailors League with Virtual Regatta INSHORE. The SSL has partnered with Many Players to develop a unique event. As Philippe Guigné, Many Players CEO explained, "We're happy to work with the Star Sailors League and offer the opportunity to play before, during (live) and after this event to all our 1 million players. Here we are making a new step, for the first time on the INSHORE game offering the magnificent Star boats and the unique SSL ranking system."
The launch of Star Sailors League movement The inaugural “Grand Final“ will officially launch the League's activities, and with five days of competition will put the emphasis on men rather than machines. The League was established last January: the birth of a dream of Olympic and amateur sailors to build an international regatta circuit to promote athletes and their skills. Under the name of the "Star Sailors League", the organisation brings together all the Star Class regattas and defines a new World Ranking (based on the model of the "ATP World Tour" created by tennis players in 1972), with more than 2,400 skippers and crew already ranked in the SSL Ranking. Drawing its inspiration from tennis and its annual "Masters", the SSL Board is launching the Star Sailors League Final which will be sailed at the end of each year.