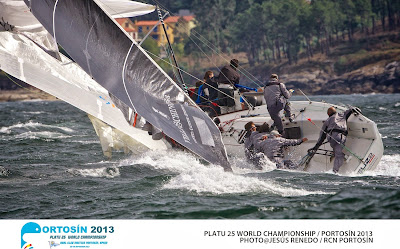 PORTOSIN - After four races competed today, the distance between  “E para comer Lugo” helmed by the Spanish Champion Gonzalo Arujo and “EUZ II  Monella Vagabonda” helmed by the defending World Champion Sandro Montefusco, is getting smaller and smaller, and the Portoguese “Credite EGS” is gaining positions. The rest of the fleet seems to have their eyes on the bronze of the Platú 25 World Championship that is being held in Portosín, with Gonzalo Araújo and Sandro Montefusco,” engaged in an exciting head to head for  closing the gap between them to just one point.


The day started at 12.35 hours, with a wind of 200, and with 12 knots of intensity. In the first race of the day Araújo didn’t get a good result. However, thanks to the option of discarding the worst result, he was able to get rid of his seventh place in this first regatta, keeping a good margin over the sailboat of Montefusco, that won this first race of the day. The second was the “Bribón – Movistar”, of Marc de Antonio, with a strong recovery after breaking several of their rigging, and third the “Credite EGS” the Portuguese Afonso Domingos, with the tactics of Hugo Rocha.
The second race of the day started at 13:45, just over an hour later, with the same intensity, but with 10 degrees wind to the left, towards the 190. This time, the “Credite EGS” of Domingos, was the winner  ahead of the “Bribón - Movistar”, that repeated podium in the same position, finishing third “Euz II Monella Vagabonda”, of Montefusco. And “E para comer Lugo” was fourth, keeping the head of the podium.
The third race of the day was under similar conditions. The wind had been fixed in the 190 and was up to 15 knots. The “Credite EGS” of Domingos won the regatta, followed by the local “Red Bull Racing Eyewear”, of José Manuel Pérez and Alfredo Mella, closing the round in the podium the “Mar de Frades”, of Juan Debén. At 16:05 sounded the start of the fourth and final race of the day. The wind kept the same, with only 5 degrees apart, coming from the 195. The wind rose to 18 knots. The “Red Bull Racing Eyewear” took this round, making a great race. Second was the “Brillamar”, of Alberto Garcia and Marga Cameselle. And third the team of the “Euz II Monella Vagabonda”.
After eight races and a discard implemented, “E para comer Lugo” helmed by Gonzalo Araújo from the Royal Nautic Club of Vigo, keeps on leading the Platú 25 World Championship of Portosín, with 22 points. Second is the “Euz II Monella Vagabonda”, of Sandro Montefusco, with 23 points. And third is the “Credite EGS”, of the Portuguese Afonso Domingos and Hugo Rocha, from the Clube Naval de Cascais, with 29 points.
In the fourth place is the “Red Bull Racing Eyewear”, of José Manuel Pérez and Alfredo Mella, from the Royal Yacht Club Portosín, with 30 points. And fifth is the “Mar de Frades” of Juan Deben, from the Liceo Casino of Vilagarcia with 35 points.