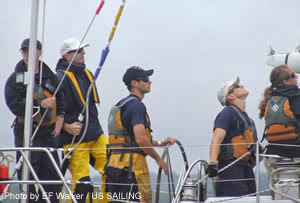 PORTSMOUTH, R.I. (September 25, 2013) – Nine teams will be racing on Chesapeake Bay this weekend in Navy 44 sloops for the 2013 U.S. Offshore Sailing Championship, hosted by Naval Academy Sailing Squadron in Annapolis, Md. Defending two-time champion (2011, 2009) Bruce Kuryla, 2011 runner-up Steve Travis, and a team comprised of U.S. Naval Academy sailors are among the squads racing for the Lloyd Phoenix Trophy beginning this Friday, September 27 through Sunday, September 29. This year, the championship will be racing in a new, expanded format from previous years.


The new format focuses on navigational and other offshore racing skills as well as boat handling. Previously, there was one distance race. This has changed to include a medium and a long distance race (weather permitting) with a variety of possible courses, as well as at least three buoy races. The distance races will be around inflatable buoys and government marks, and will be approximately 15 to 30 miles. All competitors must be classified under the ISAF Sailor Classification Code; Groups 1 and 3 competitors may compete; however teams are limited to up to three in Group 3 competitors.

Each team consists of a crew of eight, including one skipper and six crew members, plus one U.S. Naval Academy Midshipman provided from the varsity offshore racing team. A minimum of five of each competitors’ team, including the designated skipper, must have raced together in at least five regattas in AMERICAP/ORR, IMS, IRC, MORC, PHRF, Offshore One Design, Offshore Level Class Racing or Portsmouth Numbers rating systems in the past 18 months. Each team’s skipper must have been the regular helmsman for the five qualifying regattas and must start and sail all windward legs in this regatta. Teams were selected based on US Sailing Area and resume.

The Lloyd Phoenix Trophy will be engraved with the winning skipper's Area and name, and will remain at the National Sailing Hall of Fame at the United States Naval Academy in Annapolis. US Sailing medals will be provided to the skippers and crews of the top three teams. First place prizes will be awarded for each race. (from www.ussailing.org)