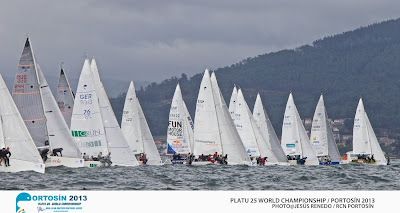 PORTOSIN - The Committee of the Platu 25 World Championship, which takes place in waters of the “Ria de Muros-Noia”, tried until the last moment, but the wind and sea conditions yesterday were really complicated in Portosín. Upon the fourth day remain the same results of yesterday, with a general classification in which the leader is the Spanish “E para comer Lugo”, helmed by Gonzalo Araújo, from the Royal Nautic Club of Vigo with 22 points. Second is the Italian “Euz II Monella Vagabonda” helmed by Sandro Montefusco, with 23 points.


And third the “Credite EGS”, of the Portuguese Afonso Domingos and Hugo Rocha, from the Clube Naval de Cascais, with 29 points. “Red Bull Racing Eyewear” helmed by José Manuel Perez is fourth, just one point behind, followed by “Mar de Frades” and “Brillamar”. The strong Spanish boat “Bribon Movistar” had to be content with a seventh place, with a strong recovery after breaking several of their riggings.
The deep storm affecting Galicia’s coast was felt in the area, with few rain, but with groundswell and unstable wind that failed to stabilize, without a clear direction The AP flag wasn’t lowered until mid-afternoon, indicating to set sail to try and start the first race, that began at 17.20, with a wind of 170, and only 9 knots.
With the entry of a squall, the wind went down, so that the Committee was forced to suspend the regatta, before the first arrival to leeward. At that time, the “E para comer Lugo”, helmed by the Platu 25 Spanish Champion Gonzalo Araújo, was first, followed by “EUZ II Monella Vagabonda” owned by Francesco Lanera and helmed by Sandro Montefusco, two times World Champion and three times Italian Champion.
Today ends the International appointment that organizes the Royal Nautic Club of Portosín, with great excitement, as the sailboat of Araújo only surpasses the “Euz II Monella Vagabonda” of Sandro Montefusco, by a single point.
"It's being a difficult tournament for us, we had a very high number of breaks, some important and this has affected us especially in 5 of the 8 races sailed", says Marc de Antonio, skipper of the “Bribón-Movistar. "Actually in those races that we didn’t have many problems and we could sail normally we ended up in second place in all of them. Tomorrow we will take the field in high spirits and go all out”, concludes De Antonio.