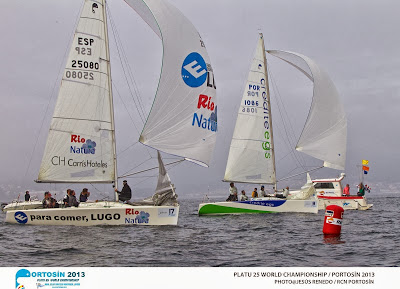 PORTOSIN - The mist became a fundamental key for the development of the only try-out validated on the first day of the Platu 25 world championship, which began today in the “Ria de Muros- Noia”, organized by the Royal Nautic Club of Portosín.  After an adjournment on land, due to the wind low intensity, the sailors of the teams participating in the intercontinental event took the opportunity to catch up on the carp enabled as the Race Village. Around two in the afternoon, the First Official of the Platu 25 World Championship, lowered the AP flag and ordered to set sail. Forty-five minutes later gave the first Top or start signal, in which was necessary to apply a general call since most of the boats were offline.


In the second one, that it was valid, they took the two possible options for the Platu, navigate both sides of the field, a circuit type mounted between buoys windward - leeward, where the buoy closer to the wind was at a mile from the committee boat, meaning, 4 miles in total were drawn between two upwind legs and two sterns. The wind was 290, meaning, northwest, and the average intensity of 8 knots.
Great wisdom of those who chose the right board and risky mission for those that went to the left. In the first case, great success for the Portuguese boat “Credite EGS” of the Olympic sailor Afonso Domingos, from the “Clube Naval de Cascais”, which is positioned as the first leader. It was followed on the podium in a close fight by the “E para comer Lugo”, of Gonzalo Araujo, from the Royal Nautic Club of Vigo, being third the local sailboat of José Manuel Pérez, the “Red Bull Racing Team”, from the Royal Nautic Club of Portosín.   In the fourth place of the general classification are the Germans of the Kamlade, of Gordon Nickel, from the Segler Vereinigung Cuxhav, and fifths the Spanish of the Pazo de Cea, from the Maritime of Canido, skippered by Laureano Wizner.
The Italian Euz II, reigning World champion , is located on the sixth place. "Today we knew it would be a pretty hard day, our goal was to have a good start and make a good first upwind. We were lucky to get it right ..."commented Hugo Rocha, the Credite EGS tactician.
"Today we achieved the goal of the day that with these difficult conditions was to stay in the leading group. In the first upwind leg we were right going to side with more pressure, and from then we remained in the fight for the try-out with the Portuguese boat  of Domingos/Rocha, but at the end we couldn’t overtake it", clarified the skipper of the “E para comer Lugo”, Gonzalo Araujo. Tomorrow the star is scheduled again at 12 noon, always depending on wind conditions.