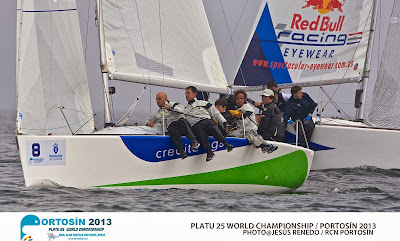 PORTOSIN – Today the Platu 25 Worlds opened officially. At 12 o’ clock, crews  were ready in front of the starting line, waiting for wind. They had to wait for long time and, just a race could be completed at the end.  A  Portoguese “Credite EGS” with the Olimpic Alfonso Domingos on board, is leading the ranking list at the moment, followed by two Spanish boats “E para comer lugo” owned by Gonzalo Araujo and “RedBull Racing Eyewear” with the Spanish Champion and Olimpic member Toni Rivas on board. Good performance also for “ Kamlade” from Stade, North Germany, a very strong crew with Gordon Nickel at helm who conquered a brilliant fourth  place today followed by  the Spanish “Pazo de Cea” owned by Laureano Wizner.


The Platu 25 World Champion defender “Euz II Monella Vagabonda” owned by Francesco Lanera and helmed by Sandro Montefusco, had to be content with a sixth position.  The unusual wind conditions could also explain the unsatisfying performance by the Spanish “Mar de Frades”, one of the most competitive crew and direct “Euz II”’s adversary. “Mar de Frades” owned by Juan Deben Tiscar and  helmed by the Olimpic Champion Antón Paz , crossed the finishing line just nineth. Until the 28t  of September,  crews coming from all over Europe will take part to the 2013 World Championship in Portosi, Galicia. Tomorrow, first race is scheduled at 11 a.m.