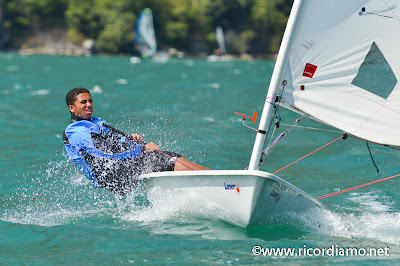 Around fifteen athletes from The United Arab Emirates were guests at Fraglia Vela Riva for two weeks of training on Lake Garda, Trentino. The reputation of the Riva club has grown so much that requests come from all over the world for juvenile teams to train here. In Spring the team from Singapore spent over 10 days training along with several European teams, in preparation for the World Optimist Championships which were held in July. This time it was Abu Dhabi who stayed for two weeks to take advantage of the marvellous conditions on Upper Garda, conditions so good that not a single day was wasted in training making their long journey every bit worthwhile.
The Laser team , under coach Ahmed Al Qubaisi, took part in the Paola Trophy this last weekend, an event held at Fraglia Vela Riva exclusively for the Laser class. This was a chance for them to come up against athletes of a high technical level and even if they didn't finish up near the top, they had the experience of sailing on one of the most well-known regatta courses in the world  undoubtedly adding to their technical growth.