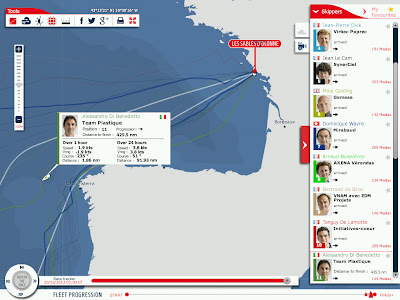 Eighty miles off Cape Finsterre, remaining quietly patient but on a state of high alert due to the high level of shipping traffic, Italian skipper Alessandro Di Benedetto is content to wait until the winds pick up on Wednesday to propel him on his final miles to the finish of his Vendée Globe, now expected to be on Friday.

There was not a hint of frustration in the voice of Di Benedetto this afternoon when he spoke with Vendée Globe HQ in Les Sables d’Olonne. The ebullient Team Plastique skipper has been dogged by light winds through today, making just one to three knots for much of the day, in hesitant breezes caused by the ridge of high pressure which has been blocking his passage to Les Sables d’Olonne, but he simply states ‘ this is the way it is going round the world’

“It is good, it is going well.” Di Benedetto said this afternoon, “It is very light winds, just 2 to 3 knots, maximum 5 to 6 knots at times and it was like that all of the night. You are fighting some of the time to make juts half a knot. There are long waves. I have 450 miles to Les Sables d’Olonne and expect to arrive on the 22nd.”

“I am having to watch out for ships and cargos because it is a busy area here. I have seen three today. I have the radar and AIS on but you always have to take care. I called up one ship last night but he confirmed to me that he had seen me and told me to hold my course.”

“I do want to finish as soon as possible but if it takes three days to get there I have no problem with that. I have been working on the boat a little bit, cleaning up, cleaning some clothes, putting videos and press stuff on to the hard disks, and cooked the last small sweets.”

“Tomorrow the winds will pick up to more than 20kts and so I should get across the Bay of Biscay OK in that.” Concluded Di Benedetto.