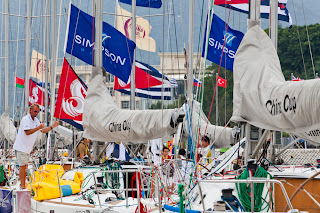 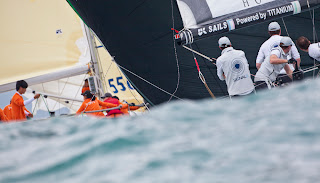 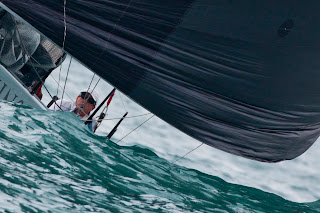 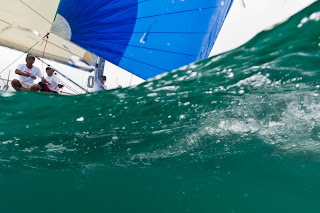 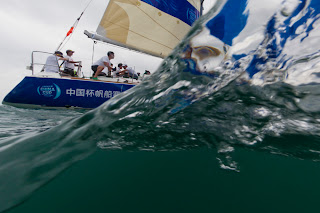 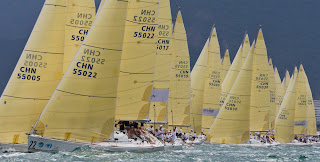 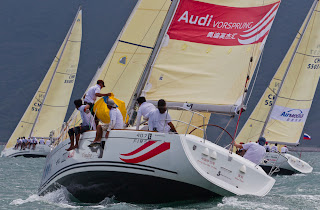 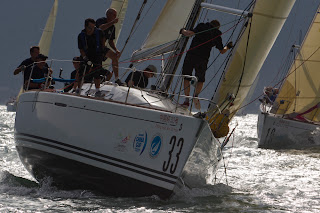 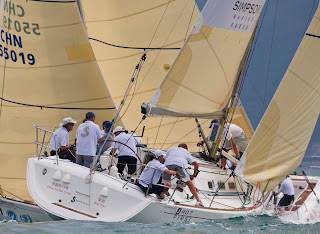 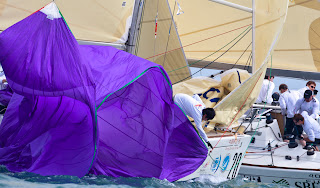 There were some surprises in store for sailors as they looked at the results after day two of the China Cup International Regatta in Shenzhen. Such is the competitive nature of the Beneteau 40.7 fleet, seven boats jumped the gun in today’s first of three windward/leeward races, and paid the price with an OCS disqualification. Highest profile of those who started too early were the top two teams from yesterday’s Simpson Marine Passage Race, Jono Rankine’s Vatti Sailing and Gery Trentesaux’s Courrier Team. Chief beneficiary of this upset to the leaderboard was Rick Pointon’s Beijing Sailing Center, last year’s winner of the Beneteau division in the China Cup.

“We had a pretty bad race, crossing the line in something like 15thplace, so it was nice to discover we got an 8th after all,” said Pointon, a British sailor who relocated to China six years ago and founded the Beijing Sailing Center. He has a number of local Chinese sailors racing on the crew, including helmswoman Summer Song who finished 8th at the Beijing Olympic Games in 2008 when she was steering the Yngling keelboat on home waters. “Summer is doing a fantastic job steering the boat,” said Pointon. “Many of us are sailing together for the first time here, and that first race today highlighted some communication problems that we needed to sort out.” And sort out those problems they did, scoring a 2,1 in the next two races.
Sitting 9 points behind the leaders is Beneteau China – TBS, skippered by ocean racing legend Michel Desjoyeaux. While some might have expected the two-time Vendée Globe winner to find the 34 mile Passage Race more to his liking, he only managed 8th yesterday, whereas on today’s short windward/leeward courses he scored 3,8,3. The French crew sit a point in front of Australians, Team Vicsail skippered by Robin Hawthorn.
There were some dominant winners in other classes, such as Stanley Chan who steered Constant Wind to 1,2,1 scores in the Far East 26 fleet, a scoreline exactly matched by Graham Young’s B32, Bits and Pieces, in HKPN 2 handicap division. It’s a similar story for Bridget Chan with 1,1,3 on her S&S 36 Windseeker, comfortably leading the HKPN 1 handicap fleet. However the most enviable scoreline of all went to Yan Yuye with three bullets for Sea Wolf, the Archambault 40 currently dominating IRC division 3.
Three months ago, a Soto 27 keelboat didn’t even exist in China, but after a rapid building programme there are 10 of these new one-design boats competing in Shenzhen this week. Jim Johnstone, of J-Boats fame, is skippering Liu Zhou Riviera Team with a crew that he has been coaching intensively in the art and science of sailboat racing. However Johnstone was blaming himself this evening after letting his Argentinean rivals on Team Goldrooster slip past him on two occasions. “I just lost my head a couple of times today, forgetting the important stuff,” said Johnstone. “With 91 boats on the race track – even if you’re not racing all of them – the wind in the middle of the course gets very chopped up and it’s often better to sail at the edges.” Agustin Eujanian’s crew hold a one-point lead over Johnstone after scoring 1,1,4 today. As Goldrooster’s helmsman, Andy Domato, pointed out, the 4th place should have been better but for the jib halyard releasing at a critical point of the race just before the windward mark when they were leading. That gear failure saw three boats slip past, but the Argentineans are certainly looking strong if they can avoid such errors for the remaining two days of competition.
On Sunday the 91 boats compete in one windward/leeward heat and an Audi Round the Island Race, with moderate breezes forecast.
* The China Cup International Regatta 2012 takes place on 26th to 29th October 2012 in the waters of Shenzhen and Hong Kong. Its consist of four days of racing organised by Royal Hong Kong Yacht Club (RHKYC), Shenzhen Marine Sports Base and Shenzhen Vanke Longcheer Yacht Club (LYC). There are 91 entries representing 18 nations: Colombia, Australia, China, Hong Kong, China, Germany, France, Israel, Turkey, Singapore, Japan, Chinese Taipei, Mauritius, Argentina, Uruguay, Philippines, USA and the Netherlands.