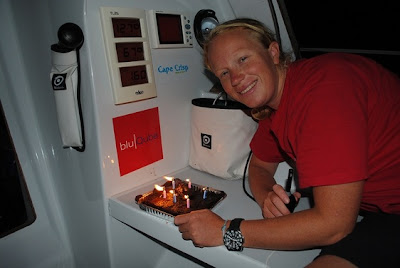 With the Global Ocean Race (GOR) Class40 fleet split in two and separated by 200 miles, the pair of leading boats, Cessna Citation and Financial Crisis have kept with the breeze and extended to the east as Phesheya-Racing and Sec. Hayai have rarely polled speed averages over five knots. While Nick Leggatt and Phillippa Hutton-Squire in third place on Phesheya-Racing were hit by a waterspout on Thursday afternoon, destroying their biggest spinnaker in a maelstrom of whirling wind and water, the South Africans have had to watch Nico and Frans Budel closing in with Sec. Hayai carrying slightly stronger wind and removing 40 miles from Hutton-Squire and Leggatt’s lead in the past 24 hours as the two boats fight to escape the light airs.
To the east, Conrad Colman and Scott Cavanough on Cessna Citation hold the lead, pulling away from Marco Nannini and Sergio Frattaruolo in second with Financial Crisis as the two boats sailed above a small low pressure system with the Kiwi-Australian duo extending their lead from eight miles to 35 miles in the past 24 hours and hitting speed averages over ten knots before headwinds arrived on Friday afternoon.

There’s been drama and damage on Phesheya-Racing for Leggatt and Hutton-Squire as they sailed downwind with their biggest spinnaker and full mainsail in 13 knots on Thursday. “The morale on board was excellent as we were catching Cessna and Financial Crisis,” explains Hutton-Squire who was off-watch sleeping when the boat suddenly heeled hard and she could hear the spinnaker flapping and snapping loudly as Leggatt shouted for help on deck. “As I sat up things started to fly across the cabin and as I was crawling out of bed I almost got hit by the first aid kit amongst other things as it came flying across the boat,” she reports.

Hutton-Squire scrambled up the companionway instantly alert with adrenaline pumping: “I looked through the hatch and the kite was in the water, it was blowing really hard, Nick was on deck easing the main sail, it was raining and water was flying everywhere,” says the South African skipper, noting small eddies forming in the water as she clipped-on and ran to the foredeck. “I was so angry and I had tears streaming out of my eyes as our A2 spinnaker had shred itself once more,” she confirms as the spinnaker was ripped for the third time in the GOR circumnavigation and following a US$900 repair in Charleston.

As the South Africans worked frantically to recover the sail, Hutton-Squire’s senses were in overdrive: “Sitting on the foredeck waiting for it to pass, I realised it wasn’t a squall. The water was flying around the boat and we were in a water spout!” she says. “I could see through the water to the edge of the spout which was less than a boat length away.” The carnage lasted a few minutes before the wind disappeared completely, but the danger was still present as the twisting column of wind and water rebuilt: “We were soaked to the bone and dropping the remains of the spinnaker on the foredeck when we saw the water spout reform about a mile from the boat, so we opened the clutch to the mainsail and dropped it straight into the lazy jacks,” confirms Hutton-Squire. “We both stood on deck watching the water spout come closer to us. What was going to happen next? We had no idea.”

However, the clouds levelled out and after a period of calm the wind shifted and Phesheya-Racing was beating north-east in under two knots of breeze and at midnight on Thursday, the duo had recovered enough to celebrate Hutton-Squire’s 29th birthday. “Presents, cake and candles were pulled from Nick's dry bag,” says Hutton-Squire. “I had no idea he was hiding a chocolate cake in there. The cake made it through the Tropical Cyclone, so he lit the candles and we had a cup of tea,” she continues. “What a great way to end the day of dramas! Thank you to bluQube and Antoine for helping Nick organise the cake and the wonderful presents!”

Meanwhile, on Cessna Citation, Conrad Colman has been taking in the scenery: “Despite passing across the heavily trafficked shipping routes between America and Europe, we haven't seen any signs of mechanized life,” he reported on Thursday evening. “We were fortunate enough to pass very close to two whales a couple of days ago, just resting on the surface,” says the Kiwi skipper. “There was a distinct difference in size, so I presume that it was a mother and a calf taking a breather.”

Although the South Africans on Phesheya-Racing have logged discarded fishing gear and debris, Colman and Cavanough observed what they initially thought were plastic bags floating on the surface. “On closer inspection, however, these turned out to be Portuguese Man-of-War jellyfish,” says Colman. “They have a large inflated ‘sail’ that propels them through the water with their deathly tentacles hanging below,” he explains. “Any thought of going for a swim this leg was extinguished when I saw how prevalent their purple stingers are.”

However, all the teams are still amazed by the weather systems surrounding the fleet. On Sec. Hayai, Nico and Frans Budel have little to do but sit it out and wait for the breeze to arrive: “What a day Thursday was!” says Frans Budel. “It was extremely hot, so we did less, there is also less to do, every job is done, we’re waiting and waiting for some wind,” explains the Dutchman. “We slowy go east in the direction of France, so why are we complaining?” he asks. “We live a good life, Nico smoked a cigar on deck while I was cooking dinner of Asian chicken with spices, rice and nuts. I added fresh paprika and an onion, a delicious meal!”

For Leggatt and Hutton-Squire, there’s a real need to get moving again: “Now we’re stuck between four weather systems,” explains Phillippa Hutton-Squire. “To the NE, Cessna and Financial Crisis are fighting it out together and we’d hoped to be in this system this morning,” she adds. “To the SE, the Volvo boats are fighting it out and to the NW Sec Hayai is catching us and hopefully bringing us some new wind and although the next 24 hours will be slow, hopefully soon we will be blasting a long towards the bluQube Scoring Gate.”

On Cessna Citation, Conrad Colman is pragmatic about the forecasting: “It gives me great comfort to read the blogs of the Volvo boats and know that even with all their experience and full time navigators they’re almost as confused by the weather as we are!” he says. “Small scale highs and lows are forcing us to dodge and weave in search of the 'least bad" option, which is a tough pill to swallow as we will soon be beating upwind,” Colman predicts. “For a route that is meant to be a downwind sleigh ride around the world, our spinnakers are still looking pretty fresh!”

Although the weather forecasting in the GOR’s section of the North Atlantic has been unreliable, there is a chance that – following a period of light airs for the two front boats on Saturday - westerlies may arrive late on Saturday and into Sunday for the entire fleet.