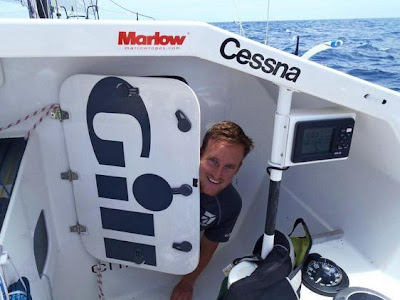 At 02:00 GMT on Monday, Conrad Colman and Scott Cavanough scorched through the Global Ocean Race (GOR) Leg 5 bluQube Scoring Gate 420 miles south of Newfoundland netting maximum points for their Akilaria RC2 Class40, Cessna Citation. As the GOR fleet leaders pick up the strong northerly breeze, speeds have been building with Colman and Cavanough polling averages of over 13 knots on Sunday night and hitting the scoring gate at over 16-knot averages as Cessna Citation finds her stride, sustaining the high speed and pulls away from the fleet building a 233-mile lead over Financial Crisis as the Kiwi-Australian duo pile eastwards.
In second place on the Italian-Slovak Class40, Financial Crisis, Marco Nannini and Sergio Frattaruolo climbed north before the wind went NNE, forcing them the south-east and they failed to find that extra gear until mid-morning on Monday, picking up speed averages to over ten knots, but have had to watch Cessna Citation add a massive 138 miles to their lead in the past 24 hours.
Meanwhile, Phillippa Hutton-Squire and Nick Leggatt in third with Phesheya-Racing were pushing average speeds over 12 knots before the South African duo lost a second spinnaker and the Dutch team of Nico and Frans Budel made averages of over 11 knots with Sec. Hayai until losing the best wind on Monday.
“Outside has been reminiscent of the Southern Ocean today,” reported Nick Leggatt from Phesheya-Racing on Monday morning and the grey, bleak surroundings matched his mood as an infected cut on his elbow and a destroyed spinnaker soured the atmosphere on the South African Class40. Leggatt has no recollection of how his elbow was injured: “We’ve been thrown about on this race so many times that cuts and bruises are regarded as the norm and are generally ignored,” he explains. “And so it was with the small cut on my elbow, but after several days it began to swell and become quite painful.”
Leggatt and Hutton-Squire contacted Dr Claire Bailey – a former crewmate of Leggatt’s from his time onboard Steve Fossett’s Playstation. “Within minutes of our emailing her she had prescribed a course of medication from our first aid kit, as well as offering advice on how best to protect my elbow over the next few days,” he continues. “Just 24 hours after contacting her, my arm already feels a lot better, but it is still annoying.”
However, a second setback could not be fixed with antibiotics as the team’s A4 followed their A2 into the spinnaker graveyard: “At this rate we’ll soon have no sails left!” says an exasperated Leggatt of the depletion in light wind and downwind sails. “It seems that the destroyed spinnakers have reached the end of their usable lives and this final leg of the Global Ocean Race was just a step too far for them,” he concludes. “Both of them were old sails that had good shape, but I guess they have just been pushed too hard for too long.”
There is, though, a bright side: “We’ve been able to make good use of the Gulf Stream for most of today,” Leggatt continues. “But the wind has shifted to the north-north-east and the seas have become quite horrible, pushing us bodily towards the south east and out of the Gulf Stream. Right now life is extremely uncomfortable onboard with a grey, overcast sky, rough seas breaking right over the boat and a cool wind blowing,” says Leggatt. “Not a fun place to be.”
Trailing the South Africans by 183 miles on Monday afternoon, the father-and-son duo on Sec. Hayai in fourth place were on good form: “On Hayai is everything is OK,” confirms Frans Budel. “We found our speeds and we had a nice day of hard sailing,” reported Budel late on Sunday night. “Now the wind will drop a bit and it will be back after Monday,” he predicted correctly as speeds dropped from over ten knots to just below two knots on Monday morning. “The wind went from 15 knots to five knots and it was very difficult to keep the boat moving,” wrote Budel in a brief email on Monday afternoon. “We’re now sailing upwind, keeping as high as possible to the east and I hope our decision to keep south will take us out of the bad weather in the next few days.”
“We’ll try to avoid the worst of the two coming depression and when they’re gone, we’ll be back on course to Les Sables again,” advises the Dutch skipper. While the wind disappears temporarily, the Budels are making good use of their time: “We’ve practised our MOB drills this afternoon,” says Frans. “Not for real, but we pushed the button of the NKE instruments and then went through and discussed the drill,” he confirms. “It’s always good to practice these things….you never know what might happen,” concludes Budel wisely.
Ahead of the four Class40s, the weather scenario in mid-North Atlantic is for strong conditions. Nick Leggatt explains the prospects: “Ahead of us a gale is forecast to develop with winds to 40 knots,” says the South African skipper of a low pressure that will sweep through the fleet in the next 20-30 hours as the double-handed teams reach the middle point of the leg from Charleston to Les Sables d’Olonne. “A long way to our south-west the second tropical storm of the season has already formed, still a few days before the hurricane season officially opens on 1 June,” he adds. “This storm, Tropical Storm Beryl, is still somewhere near Florida, but is also forecast to eventually track north east, eventually becoming an extra-tropical depression, and bringing an added dimension of complexity to the weather of the North Atlantic.”
GOR leaderboard 15:00 GMT 28/5/12:
1. Cessna Citation DTF 1904 13.8kts
2. Financial Crisis DTL 233 10.2kts
3. Phesheya-Racing DTL 376 8.5kts
4. Sec. Hayai DTL 559 4.5kts