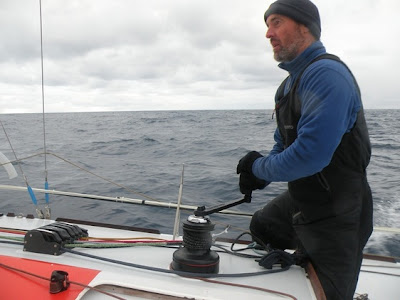 After 28 days at sea, the leading Global Ocean Race (GOR) Class40 is closing in on the Leg 3 finish line in Punta del Este, Uruguay, following a week when tough decisions were made in the final approach to Cape Horn. Having taken the lead in the GOR, the period at the front of the fleet was short but very sweet for Marco Nannini and Hugo Ramon on Class40 Financial Crisis and by the start of Week 4 (20-26 February) of Leg 3, Conrad Colman and Adrian Kuttel were back in the lead on Cessna Citation with 450 miles remaining to the Felipe Cubillos Cape Horn Gate.
While progress through the Southern Ocean for the South African duo on Phesheya-Racing was momentarily stalled by a high pressure system producing exceptionally calm but frigid conditions in the Furious Fifties, a low pressure system forming off Antarctica forced hard strategic decisions on Cessna Citation and Financial Crisis. Colman and Kuttel opted to outrun the storm with Cessna Citation and reached at full-pace towards Drake Passage while Nannini and Ramon wisely chose a hove-to manoeuvre south-west of the cape, riding out 50-55 knots gusts with Financial Crisis.
As Cessna Citation crossed the Felipe Cubillos Cape Horn Gate at 16:25 GMT on Wednesday winning the trophy for the first GOR Class40 around the cape, Nannini and Ramon were gearing back-up on Financial Crisis as the low pressure chased Cessna Citation out of the Southern Ocean and into the South Atlantic. Late on Thursday, Financial Crisis rounded the cape and with light airs forecast, Nannini and Ramon sailed through the Le Maire Strait with a favourable current and emerged into the South Atlantic late on Friday.
With Nick Leggatt and Phillippa Hutton-Squire finally shaking off the light winds south-west of Cape Horn with Phesheya-Racing, the South Africans remained the only GOR Class40 in the Pacific as Cessna Citation and Financial Crisis left the Falkland Islands to starboard and raced north off the coast of Patagonia. Throughout Saturday, Colman and Kuttel increased their lead on Cessna Citation, digging into strong, 35-45 knots of south-easterly wind spinning off the back of a deep low pressure system and hitting 13-knots averages. By 15:00 GMT on Sunday afternoon, Colman and Kuttel were averaging the best speed in the fleet at 10.4 knots with 538 miles remaining to the finish line.
While Cessna Citation rode the strong wind to the north, Marco Nannini and Hugo Ramon were tackling northerly headwinds south-west of the Falklands forcing Financial Crisis on a long tack towards South America, tacking away from the coast of Patagonia on Sunday morning to clear a forecast area of light breeze. On Sunday afternoon, The Italian-Spanish duo remained in headwinds averaging just under five knots, trailing Cessna Citation by 506 miles.
South-west of Financial Crisis by 445 miles on Sunday afternoon, Nick Leggatt and Phillippa Hutton-Squire had climbed up to 57S in their final approach to the Felipe Cubillos Cape Horn Gate. For the South Africans, the final miles to the cape are returning to more usual Southern Ocean conditions: “The wind was forward of the beam and we were pounding over the big waves again,” reported Nick Leggatt on Sunday morning. “This gave us a good reminder about the first few weeks of this leg from Wellington and the wind has been very gusty and shifty,” he continues. “The sun has not been seen for days as dark grey heavy clouds loom over the boat while the icy cold water of the south east Pacific Ocean splashes over the deck and runs down into the cockpit.”
At 15:00 GMT on Sunday, Phesheya-Racing was 187 miles south-west of Cape Horn and with weather files suggesting light, following wind, Leggatt and Hutton-Squire may be able to sail close into Cape Horn as they leave the Southern Ocean.
While, the remaining trio of GOR Class40s will approach the Leg 3 finish line in Punta del Este, Uruguay, from the south, Dutch skipper, Nico Budel, is approaching from the north as he solo-sails Sec. Hayai through the South Atlantic to re-join the GOR fleet for Leg 4 and Leg 5. Following his dismasting on Sec. Hayai with his son Frans on the first night at sea in Leg 2 from Cape Town, the Budels have stepped a new mast and have new sails for the final two legs of the GOR. Nico Budel and Sec. Hayai left Cape Town on the 15 February and the Dutch Class40 is currently 2,300 miles north-east of Punta del Este, sailing downwind 865 miles off the coast of Brazil. When Sec. Hayai reaches Uruguay, Budel will be met by his family and his co-skipper for Leg 4 to Charleston, USA, Erik van Vuuren.
GOR leaderboard 26/2/12:
1. Cessna Citation DTF 538 10.4kts
2. Financial Crisis DTL 506 4.8kts
3. Phehseya-Racing DTL 1021 6.2kts