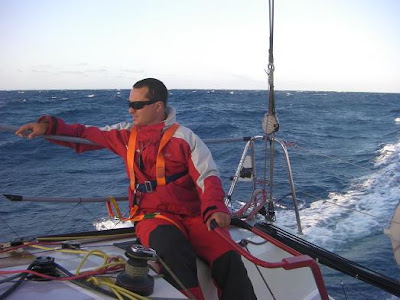 At 23:25 GMT on Thursday, Marco Nannini and Hugo Ramon crossed the Felipe Cubillos Cape Horn Gate at 56S with Class40 Financial Crisis. Racing 49 miles off the infamous outcrop at the southern tip of Chile, Financial Crisis is the second, double-handed, Global Ocean Race 2011-12 (GOR) Class40 to round the world’s most notorious cape. The fact that Conrad Colman and Adrian Kuttel took line honours at the gate with Cessna Citation doesn’t diminish the immense achievement of racing only the fifth Class40 to sail through the Southern Ocean and around Cape Horn. “What a day!” exclaimed Nannini shortly after crossing the gate. “I think it will take me a while to fully process this fact, but I’m sure it’ll live in my thoughts for the rest of my life.”

Having carried out a text book heaving-to manoeuvre west of Cape Horn to avoid strong winds as they approached the cape, Nannini and Ramon timed their run through the treacherous Drake Passage perfectly – almost: “Just when the weather was finally improving we were left with a last minute reminder of where we are as a squall came through during the night bringing another stint of 50-knot winds and lots of snow…it was quite surreal,” comments Nannini.

For Nannini’s co-skipper, Hugo Ramon, rounding the cape is an opportunity to indulge in some Cape Horn traditions: “Now I can wear a gold earring in my left ear and pee into the wind!” claims the 26 year-old Spaniard. On a more serious note, Ramon knows that sailing through Drake Passage is a monumental challenge: “I’ve really learnt, once again, that you have to respect nature and the elements,” he confirms. “I don’t think we tamed or conquered the elements by rounding Cape Horn safely,” he says. “Simply that Cape Horn has let us pass.”

After rounding Cape Horn conditions became increasingly light throughout Friday as Financial Crisis climbed north steeply and with weather models predicting further light airs, Nannini and Ramon decided to cut the corner. At 17:00 GMT on Friday, Nannini and Ramon had committed to sailing through Le Maire Strait – a 17-mile wide stretch of water between mainland Tierra del Fuego and the offlying Isla de Los Estados that has famously tricky currents and eddies.

Meanwhile, 370 miles to the north of Financial Crisis on Friday afternoon, Conrad Colman and Adrian Kuttel were 150 miles off the coast of Patagonia with Cessna Citation having left the Falkland Islands to starboard on Thursday night. Although the breeze has gone lighter for the New Zealand-South African GOR leaders, around 400 miles to the north a deep low pressure is building with 50+ knot winds forecast before the system tracks eastwards and into the South Atlantic. The duo on Cessna Citation are likely to aim for the western edge of the system.

Approximately 540 miles south-west of Cape Horn on Friday afternoon, Nick Leggatt and Phillippa Hutton-Squire are working beneath a high pressure system blocking the route of Phesheya-Racing: ““The weather forecast from the Chilean MRCC said that the wind would ease some more and the sea would be ‘rippled to slight’,” confirms Hutton-Squire. “They are very right as there is a small swell rolling, but generally it is very flat,” she adds. “I can’t believe we are in the South-East Pacific but we are enjoying the sea state and wind conditions.”

The weather on Friday did permit 45th birthday celebrations for Leggatt: “The sea is so flat today we lit the candles, sang happy birthday, took some video and photos, then Nick blew the candles out.” Despite the celebrations on board, the frustrating light airs are set to continue: “We think we have about three or four days until we get to Cape Horn, but it all depends on the high pressure in front of us,” predicts Hutton-Squire.