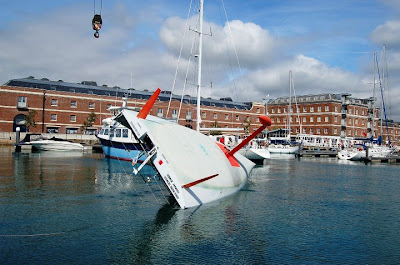 The Global Ocean Race 2011-12 (GOR) can confirm that the finish port for the 30,000-mile, double-handed, Class40 circumnavigation will be Les Sables d’Olonne in the Vendée region of France. The town of Les Sables d’Olonne on the North Atlantic’s Bay of Biscay coast is synonymous with solo and short-handed offshore sailing as the start and finish port of the Vendée Globe and the Les Sables-Horta-Les Sables Race and is also the home and Head Quarters of the Class40 Association. Currently mid-Indian Ocean on Leg 2 of the GOR from Cape Town, South Africa, to Wellington, New Zealand, the GOR fleet will finish their nine-month circumnavigation in Les Sables d’Olonne at the end of May next year following Leg 5 from Charleston, USA.
For Josh Hall, Race Director of the GOR the inclusion of the famous ocean racing destination as the finish port for the GOR is perfect: “As a Race Organisation, we made the innovative choice of starting the Global Ocean Race 2011-12 in Palma, Mallorca. However, our agency in Mallorca was unable to meet their contractual obligations towards hosting the finish of the event and we were forced to look for the correct support elsewhere,” says Hall. “Having started the race in a port that is entirely new to shorthanded circumnavigation races, it seems highly appropriate that we take the finish to the cradle of solo and double-handed sailing in Les Sables d’Olonne,” he explains. “I know that all our teams are delighted with the choice and are looking forward to finishing the race in France,” adds Hall. “On a personal note, from my participation in the 2000-2001 Vendée Globe, I shall never forget the unique atmosphere and welcome that Les Sables d’Olonne provides for round-the-world sailors. I am very proud that our GOR teams will have the opportunity of experiencing this quite extraordinary spirit first-hand.”
At a press conference on Wednesday at Les Sables d’Olonne’s Salle de la Municipalité, Stéphane Tournade, responsible for all nautical events and activities in the town, was delighted with the news: “Les Sables d’Olonne welcomes this international race with open arms,” commented Tournade. ”In the space of one year we are hosting events for the Mini 6.50 Class, the IMOCA Open 60 Class and now, Class40,” he continued. “This builds upon our town’s existing reputation in sailing and is an excellent addition to our busy calendar for next year.” For Jean-Louis Parent from the region’s Institute of Ocean Sports, the GOR represents an unmissable opportunity to bring Class40 to Les Sables d’Olonne in 2012: “In odd-numbered years, Class40s participate in the double-handed Les Sables-Horta-Les Sables and in even-numbered years, it’s the Mini 6.50s in the same race single-handed.” With the seventh edition of the Vendée Globe next year, the timing is immaculate. “So, it really is perfect having three, major offshore classes in our port in 2012 thanks to the Global Ocean Race,” adds Parent.
Francois Angoulvant, President of the Class40 Association, is looking forward to the GOR fleet’s arrival: “This is an excellent initiative by the GOR’s Race Organisation and Race Committee,” believes Angoulvant. “Bringing the Class40s to Les Sables d’Olonne at the end of their circumnavigation is very symbolic as the town is the finish port of the Vendée Globe and has been the Head Quarters of the Class40 Association for many years,” he confirms. “But the town also guarantees a traditional, enthusiastic, Les Sables d’Olonne-welcome to our round-the-world yachtsmen!” Alan Green of the GOR Race Committee agrees with the Class40 President: “Few ports in the world have taken oceanic sailing totally to their hearts,” says Green. “Les Sables d’Olonne is one of them and the fleet is guaranteed a great welcome at this, the natural home of Class40.”