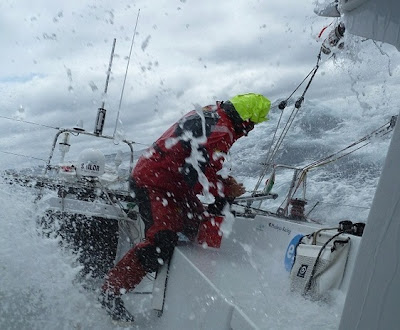 With a low pressure system sweeping eastwards below the double-handed, Global Ocean Race (GOR) Class40s, many boats have switched to survival mode as a Force 9 gale blasts squalls and intensely strong south-westerly wind  through the fleet’s narrow corridor between 42S and 45S in the Indian Ocean’s Roaring Forties. Furthest north in fifth place, the autopilot on Phesheya-Racing has been unable to cope with 45 knot squalls, forcing Nick Leggatt and Phillippa Hutton-Squire to hand steer and reduce sail. On Financial Crisis, Marco Nannini and Hugo Ramon in fourth, sailing 70 miles further south than Leggatt and Hutton-Squire, recorded 52.7 knots of wind, but continued to average 11-12 knots throughout Friday night and Saturday morning, taking refuge down below as the storm raged.
On Campagne de France, 1,000 miles directly north of the storm’s centre, and 558 miles east of Financial Crisis, Halvard Mabire and Miranda Merron also registered 52 knots and steep waves with hail stones strafing the Franco-British duo. At the front of the fleet, Conrad Colman and Sam Goodchild set a new GOR 24-hour run record of 350 miles on Friday morning with Cessna Citation and continued to poll the fleet’s highest averages on Friday night and into Saturday, extending their lead over Ross and Campbell Field in second with BSL despite the father-and-son duo averaging just under 13 knots for most of Saturday.
Early on Saturday morning, the South Africans were over-canvassed on Phesheya-Racing: “We made a mistake today,” admits Phillippa Hutton-Squire. “I saw the wind increasing quite quickly from 25-30-32-34-36 knots and suddenly the big black cloud that had been approaching us for a while was overhead and it was blowing 45 knots,” she reports. “The autopilot could not handle it and it spun out, the sails were flapping and there was water flying everywhere.”  Hutton-Squire quickly grabbed the helm, taking the Akilaria Class40 downwind while Nick Leggatt put in a third reef.