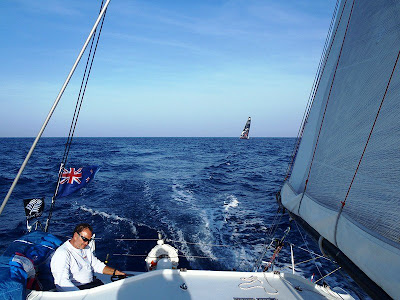 Complex and extremely tough weather conditions in the Southern Ocean continue to roll across the double-handed Global Ocean Race (GOR) Class40s in quick succession. Furthest west, the South African team in fifth place with Phesheya-Racing has been dodging gales 160 miles above the Australian Ice Limit while the Italian-Spanish duo on Financial Crisis in fourth took the full force of a low pressure system on Tuesday morning and was knocked flat in a 58-knot gust. Beyond the eastern extremity of the ice limit, the Franco-British team on Campagne de France in third have remained in the north at 42S in big seas but lighter airs as the low pressure systems rumble passed to the south.
At the head of the GOR fleet, the strong breeze pounced on Cessna Citation and BSL on mid-Monday night GMT before continuing south-east into the Southern Ocean. Both Cessna Citation and BSL in second place picked up pace in 30+ knots of north-westerly wind with Conrad Colman and Sam Goodchild blazing through the storm polling averages of just under 17 knots, breaking their existing 24-hour record as they dived through the Roaring Forties to 48S.
At 15:00 GMT on Tuesday, Nick Leggatt and Phillippa Hutton-Squire were 160 miles north of the ice limit, trailing Financial Crisis by 357 miles and averaging 10.4 knots. “We’re right in the middle of a fairly complex weather system, but have managed to position ourselves quite nicely for the moment, though things never stay the same for long down here!” warned Nick Leggatt on Tuesday morning. “Last night our Sat-C satellite data communication system started beeping and flashing,” he reports. “A quick check on the computer showed that we had received a ‘Distress/Urgent’ message.” Opening their inbox, the South African duo found three simultaneous gale warnings for their immediate area of the Indian Ocean issued by the Australian Met Office. “At least they have upgraded their wording from ‘vigorous’ to ‘urgent’!” applauds Leggatt.