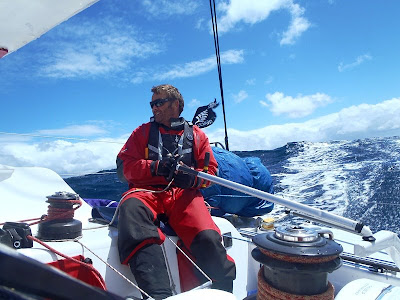 It has been another high-octane 24 hours for the double-handed, Global Ocean Race (GOR) Class40s. Down below 47 degrees South, Cessna Citation and BSL have been breaking and resetting the GOR’s 24-hour distance records as the two boats fast-reached east in sustained 30-35-knot winds while above the Australian Ice Limit at 45S, Financial Crisis in fourth place was hurled towards this virtual safety barrier in 60-knot, northerly gusts. In 25-30 knots of NNW wind, Campagne de France in third picked up the pace descending south and Phesheya-Racing are up to speed, running east above the ice limit and making up ground.
On Tuesday afternoon, the highest sustained speeds in the GOR were recorded by the fleet leaders, Conrad Colman and Artemis Offshore Academy sailor, Sam Goodchild on their Akilaria RC2 Class40, Cessna Citation, and the New Zealand, father-and-son duo of Ross and Campbell Field in second place on their Verdier-designed Class40, BSL, as the two boats hooked into strong north-westerly wind. Geovoile tracking data reveals that at 14:00 GMT, having polled averages of over 14 knots, the Fields clocked a 24-hour run of 355.6nm and two hours later – after polling averages of 16 knots – Colman and Goodchild set the 24-hour barrier at 359.1nm – phenomenal distances for a Class40.
On Cessna Citation, Colman and Goodchild judged the frontal system’s approach immaculately: “Sam and I decided to go for broke to consolidate our lead over the Fields,” reports Conrad Colman. “We ran deep through puffy 45+ knot squalls and positioned ourselves in the path of the beast,” he explains. “It might not be evident that sustained 35 knots was an opportunity to attack, but we figured that if we could keep our foot on the loud pedal and stay ahead of the worst of it, then we could play the edge of the front and skim off as much wind as we wanted.”
The New Zealand-British duo prepared for the ride of a lifetime: “The sky stayed blue and the white caps sparkled before being blown into the air as the wind built and stayed at 35 knots,” recalls 28 year-old Colman. “We were fully pressed, but still able to maintain control at 120-130 True Wind Angle and played the waves to surf for extra speed - Sam and I both saw 26 knots of boat speed on the dial.” With Cessna Citation flying south-east at 49S, it was everyman for himself on deck with both the co-skippers flung around the cockpit: “After one altercation with a wave I was bodily picked up and deposited, spread eagled on my back on top of the life raft, two meters from where I had been helming,” reports Colman. “I was able to regain control but it was an eye opening experience and a warning taken to heart,” he admits. “As proof that sometimes the great lessons in life need to be learned twice, Sam was later pushed off the helm and thrown into the sail stack on the back of the boat.”