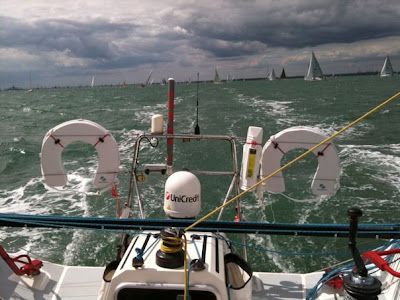 As the double-handed Class40s in the Global Ocean Race 2011-12 (GOR) entered the most remote sector of the Indian Ocean and crossed the Leg 2 Celox Sailing Scoring Gate north of Kerguelen Island, a cold front swept through the fleet bringing the long period of reaching on port tack to an abrupt end. North-west of the leading trio of Class40s, Financial Crisis and Phesheya-Racing were first to feel the front on Saturday with the wind switching round to an icy, southerly blast as the system rolled east through the Roaring Forties. By late Sunday, the extraordinary, sustained speeds of the leading trio hurtling east ahead of the front began to moderate as the breeze went aft and settled in the south-west.
Fleet leaders, Conrad Colman and Sam Goodchild on Cessna Citation, were averaging 15 knots as the front approached, throttling back to 11 knots on Monday morning, but pushed the pedal down, dropped south and built speeds up to over 13 knots. For Artemis Offshore Academy sailor, Sam Goodchild, the transition was relatively painless: “The front that’s been tormenting us for the past four days finally passed over us at daybreak this morning [23:00 GMT Sunday],” he reported on Monday morning. “Thankfully, it wasn’t too ferocious,” adds Goodchild. “The wind dropped, turned through 100 degrees and picked back up again.” In the 15:00 GMT position poll on Monday, Cessna Citation was making 13.2 knots with a 41-mile lead over BSL as the frontrunners drop to 47 degrees south. “We’re now back in high speed reaching conditions heading south with BSL just to our west and, thankfully, we’ve managed to shake off Campagne de France for the time being but, with 4,000 miles still to go to the finish line in Wellington, we expect them to be back.”
On BSL, Ross and Campbell Field dealt with a very upset albatross in the Class40’s cockpit (see below) and sail damage as the front passed through. Campbell Field reports from 46 degrees South: “It was a pretty benign front in terms of the ones we had on Leg 1 with classic pre-frontal dips in the barometer then a hard squall with the shift,” he says. “This one just came as a bit of rain and an instant shift without much increase in pressure, however we had a shocker,” he admits. “Our fractional spinnaker is now out of action for a while sustaining some damage due to the instant shift and confused seas.” Trailing the Fields by 39 miles at 15:00 GMT and tracking east 120 miles to the north of Cessna Citation and BSL, Halvard Mabire and Miranda Merron in third on Campagne de France took the front in their stride: “It started with a few hours of glacial drizzle and rain and then a very rapid wind shift to the southwest just before dawn,” reported Miranda Merron on Monday morning. “The barometer is now rising and there may even be some blue sky soon,” she adds, hoping for a break in the bleak, Southern Ocean cloud canopy.
North-west of Campagne de France by 560 miles on Monday afternoon, Marco Nannini and Hugo Ramon were having a tough time on Financial Crisis as they clung onto the back of the cold front. Ramon describes the scene on Monday morning: “Today is one of those times when you want to stay inside and not even poke your nose out of the hatch,” explains the 26 year-old Spaniard. “The sea is incredibly confused with crossing waves everywhere of all sizes, all colours and I’m certain they’re getting wetter and wetter.” The wind strength and direction is as unpredictable as the sea state: “There’s absolutely no sense or pattern to the wind direction,” Ramon continues. “I stand in the cockpit shouting ‘What’s wrong with you!’ at the sky as the wind flicks through 40 degrees in under three minutes and goes from 15 to 33 knots in a couple of seconds.” Despite the hardship, Financial Crisis averaging eight knots, passed through the Celox Sailing Scoring gate at 09:00 GMT, although the conditions continued to be both exhausting and frustrating. “Even with two of us on deck it’s impossible to react with efficient trimming or sail choice in this stuff,” adds Ramon.