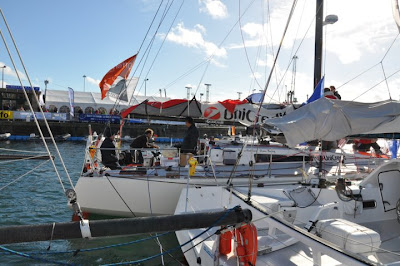 As the main group of double-handed Class40s in the Global Ocean Race (GOR) prepare to confront the 200-mile wide centre of the high-pressure system directly to their south, the fleet leaders, BSL and Campagne de France, have crossed the 1,000 mile barrier to the Leg 1 finish line in Cape Town. Over the past 24 hours, the speed averages on both the leading Class40s has fluctuated as the two teams break through an area of squalls and calms: “The last couple of days have been bloody hard work staying focussed and moving in the right direction,” reports Campbell Field from BSL in pole position. “These squalls have been unbelievable, at the rate of maybe one every three hours with gusts into the high 20’s from almost nothing, shifts of over 50 degrees, really keeping us on our toes, working like galley slaves.”
Approximately 70 miles to leeward of Ross and Campbell Field, Halvard Mabire and Miranda Merron on Campagne de France have encountered similar conditions: “The past few days have been marked by a procession of clouds and squalls with our names on them,” confirmed Merron on Monday morning. “They suck away all available wind, leaving small human beings on a 40 foot boat yelling insults at them, which invariably leads to a regeneration of the same cloud overhead,” she explains. “Not that good for forward progress!” In the past 24 hours, the Fields have added 21 miles to their lead over Mabire and Merron, stretching the distance to 32 miles at 12:00 GMT on Monday.
The Rugby World Cup final on Sunday was a focal point for the New Zealand team on BSL: “We had a few targets in support of the All Blacks,” continues Campbell. “We vowed to do whatever we could to take the GOR lead for the game on Sunday - tick, done; I have worn my All Black shorts since the start 29 days ago - tick, done. No point in taking them off now though with five days or less to run.” While the 9-8 victory by the All Blacks is a huge relief for the Fields, some of the on board celebrations are wearing thin: “Now I need to get Ross to stop singing his cover of Freddy Mercury’s We Are The Champions,” comments Campbell. “At least it makes a change to the only other song he knows - Sinatra’s New York, New York. Apparently he sings to keep himself awake at night. It works on me too when in my bunk.”