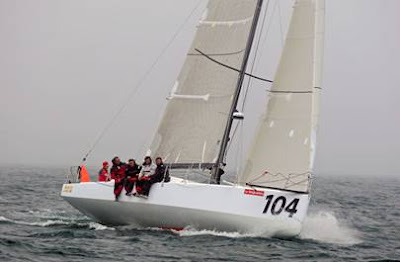 At 05:13:25 GMT on Friday 28 October, Ross and Campbell Field took first place in Leg 1 of the double-handed, Class40 Global Ocean Race (GOR) crossing the finish line in Cape Town after 32 days 17 hours 13 minutes and 25 seconds and 7,300 miles of racing from Palma, Mallorca, on their Verdier-design Class40 BSL averaging 9.3 knots and finishing 89 miles ahead of Halvard Mabire and Miranda Merron on Campagne de France. Following a final sail change off Lion’s Head, swapping from spinnaker to jib, BSL beat on port tack passed Signal Hill and across the finish line off Cape Town shortly after sunrise. GOR Race Organisation officials boarded the Class40 to congratulate the duo and check that the engine seals installed pre-start were in place before the Fields dropped their sails and motored into Victoria Basin, through Alfred Basin and into the GOR Race Base at North Wharf in the V&A Waterfront Marina.
Clearly exhausted, showing signs of significant weight-loss, but on characteristically good form, Ross and Campbell Field admitted that they had little left to give: “We’re absolutely stuffed, I’ll be honest,” said Ross shortly after berthing at North Wharf. “It’s all due to Halvard and Miranda as they’re clever sailors and know where to position their boat,” he continues. “We knew that we’d have a chance to peg them back once we got into the Southern Hemisphere and the reaching conditions suited our boat, but we had to push really hard – it’s absolutely crucial. If you don’t push 120 per cent, you’re gone and – fortunately – Campbell did excellent work on the weather.” Campbell Field reckons that if Campagne de France had extended over 40 miles ahead, the door would have shut: “There’s always more pressure when you’re chasing,” he believes. “At times we were hanging on by our fingernails.”
Prior to the delivering the boat to the GOR start in Palma from Lymington on the South Coast of England, the Fields had raced BSL once in the Rolex Fastnet Race and GOR Leg 1 was an eye-opener for two highly-experienced sailors, but newcomers to Class40: “It’s a really startling boat, quite amazing,” says Ross.
“Sometimes, it just kept going faster and faster and you had to wonder when the limit would be reached.” There was one major crash that the duo will always remember when they feared the mast would be lost, but there is no major damage. “The boat is immensely strong and the only breakage has been due to our errors,” confirms Campbell. “Nothing has failed on board.”
Other than work on the sails and strengthening up some pieces on the boat, there’s little preparation before the start of Leg 2 to Wellington, New Zealand, on Sunday 27 November. “The main objective is getting some rest,” he continues. “We were getting weaker and weaker and although our muscles weren’t atrophying, we just had less and less strength.” Despite the fatigue and potential recovery time, there are no regrets: “It’s just a fantastic event and a brilliant concept,” adds Ross of his sixth circumnavigation race. “It’s disappointing that boats pulled out just before the start, but they’re missing out on the best sailing in the world and we’re loving it!”