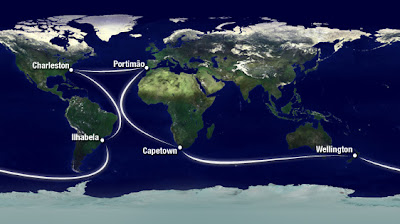 Over Tuesday night, five of the six double-handed, Class40 teams in the Global Ocean Race 2011-12 (GOR) passed south of Gibraltar and into the North Atlantic in strong breeze and demanding conditions. Squeezing north of the Traffic Separation Scheme (TSS) bisecting the Strait of Gibraltar, Ross and Campbell Field were first through at 20:00 GMT with BSL, passing close to the lighthouse at Tarifa one hour ahead of Halvard Mabire and Miranda Merron on Campagne de France with Conrad Colman and Hugo Ramon on Cessna Citation in third, six miles behind the Franco-British duo. Just three hours later, the South African team of Nick Leggatt and Phillippa Hutton-Squire on Phesheya-Racing passed Gibraltar just under 50 miles behind the race leader and two miles ahead of Marco Nannini and Paul Peggs on Financial Crisis in fifth place.
All the GOR teams were keen to leave the Mediterranean, particularly on board Campagne de France: “The sea state was short and steep and easy miles were gained surfing,” wrote Miranda Merron in the final approach to the Strait of Gibraltar. “However, it was imperative not to get it wrong - easy enough in daylight perhaps, but then it got dark, and there is no moon at the moment, so just sailing by feel and hoping for the best in the confused sea state, occasionally shipping a breaking wave over the side and listening to waves breaking nearby and taking off at 17 knot in surfs.” In addition to the total blackout enveloping Mabire and Merron, their Class40 seemed invisible to commercial traffic: “Plus we nearly got run over by a ship in the middle of the night which didn’t notice us until they were about 200 metres from our transom, despite AIS carried by ships and us,” she adds.
While Campagne de France avoided any major dramas, Colman and Ramon had an eventful exit through the Strait: “The Mediterranean was keen to be rid of us, but not without earning our respect one last time,” recalled Colman the following morning. “As we approached the famous Strait, the wind built from 15 to 25 and then to 35 knots by Tarifa just as we struggled to get our spinnaker down.” Preparing for the manoeuvre, the crew of Cessna Citation sought divine intervention: “Having called upon our guardian angel with the spinnaker drop, we then spent further credits with her as the Code 5 halyard pulled through the clutch and we ran over the sail.” As is often the case, problems began to cascade on board: “We managed to re-hoist it and then the cover on the tack line broke, sending the lower corner of the sail skyward,” explained the 27 year-old Kiwi. “The only thing that saved us was that the furling line caught on the mast and we were able to slowly grind down the unruly sail to continue blasting out of the Strait and down the coast of Morocco.”
Trailing Cessna Citation by 26 miles at Gibraltar, Leggatt and Hutton-Squire were on high alert: “We sailed through the Strait missing the Traffic Separation Scheme and the breakwater off Tarifa by the skin of our teeth,” explains Phillippa Hutton-Squire. “It was a fast and exciting ride with our eyes skinned for shipping and other obstacles.” Sailing with full-main and A4 spinnaker, the South Africans were also keeping a keen watch for Financial Crisis: “We could see Nannini and Peggs just behind us, slowly catching us up,” she continues.