Global Ocean Race - Lining-up for the Strait of Gibraltar 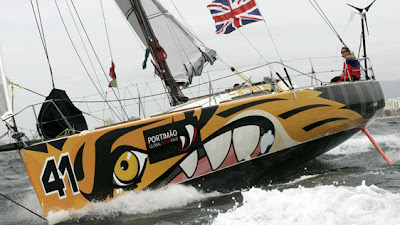 As the six Class40s in the double-handed Global Ocean Race 2011-12 (GOR) entered the funnel between Spain and the African coast, the fleet’s ranking positions altered as the teams squeezed into the 110-mile wide section of the Mediterranean and Alborán Sea leading to the Strait of Gibraltar. Having led the fleet since the start in Palma Bay on Sunday, Ross and Campbell Field on the Verdier Design BSL set the pace over the first 24 hours of racing: “We are off like a robber’s dog,” reported Campbell Field late on Monday. “Great start and it felt very good to lead around the first mark,” he continued. The Fields held a convincing lead throughout Sunday night and Monday in around 17 knots of north-easterly breeze supplying a fast route south-west towards Gibraltar: “We’re hooked into it and we are off. Charging along, big gear up and loving every minute. My personal 24 hour high has been finally starting this fantastic event: the only low-point has been bidding farewell to my wonderful wife and beautiful son for the next six to seven weeks.”
However, the Fields’ grip on the leadership was challenged shortly before midnight on Monday as the New Zealand-Spanish duo of Conrad Colman and Hugo Ramon on their new Akilaria RC2 Cessna Citation took the lead south of Cabo de Gata on the Spanish coast: “The passage passed Gibraltar is the first stumbling block of this leg,” confirmed 26 year-old Hugo Ramon. “With tailwinds, it seems that the differences in speed are not going to be very important,” predicts the fleet’s youngest co-skipper. “At the moment the big boss seems to be BSL, but on Cessna Citation we’re still experimenting with the sails, so we’ll have to see how it goes.”
By early Tuesday morning, the Fields and BSL were back in the lead with Cessna Citation under one mile astern with 90 miles to Gibraltar and the Franco-British duo of Halvard Mabire and Miranda Merron in third with their Pogo 40S² Campagne de France just eight miles behind BSL with the leading trio on port gybe averaging between eight and nine knots in 14 knots of westerly breeze.
While BSL, Cessna Citation and Campagne de France took the central track to Gibraltar in stronger breeze, the two first generation Akilarias, Phesheya-Racing and Financial Crisis, gybed onto starboard heading towards the Spanish coast. For the Italian-British duo of Marco Nannini and Paul Peggs on Financial Crisis, the passage towards Gibraltar was near-perfect with their 2007 Akilaria hitting 20 knot surfs: “The wind picked up and off we went free surfing,” says Nannini.