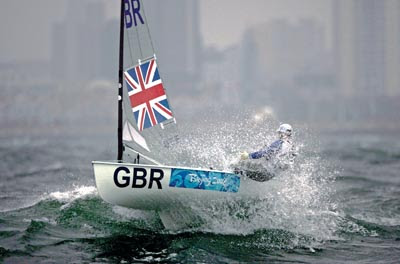 Determined to get at least one more race on the score card on the third day at the Finn Silver Cup in Moscow, the fleet did not come ashore until 21.00 after a long day on the water. Artur Kotlyatov (RUS) won the only race completed, but race one winner Kistanov Arkadiy (RUS) maintains the overall lead. The fleet has now sailed just two races in three days after all racing was cancelled on Wednesday with very little wind on the lake. The series has been severely hampered so far by very light and changeable winds
Early on Thursday, there was a nice breeze so the second race of the series was started just after midday. But it didn't last long. The wind started to drop at the end of the first upwind, and effectively split the fleet into two, but then when it died completely while the boats were on the second upwind. The race was abandoned and the sailors were sent back to shore to wait for better breeze. Ashore, the young Finn sailors were given a seminar of Rule 42.
Later in the afternoon, the wind returned and the fleet set sail again. After a general recall, the race was started under black flag with one of the favourites Terpigorev over early. He actually went on to win the race on the water but still scored BFD.
The wind was initially around 8-9 knots but again started to fade away to 3-4 knots in the latter stages, but at least it was enough to finish the race. Artur Kotlyatov finally took the win followed by Oli Tweddell (AUS) and Sivenkov Viacheslav (RUS). The sailors finally arrived ashore amid strong winds and rain at 21.00 as thunderstorms swept through.
In the overall ranking, Sivenkov climbed to second in the overall results behind Arkadiy, with Kotlyatov climbs to third, again making it a Russian top three going into the fourth day on Friday. Racing will restart on Friday at 11.00, wind permitting.
Kyrgyzstan sailor
For one sailor here, this is the first time he has ever seen a Finn, never mind raced one at this level. He is Asian, speaks Russian and saw his first Finn in Moscow just one week before the Finn Junior Worlds. Vladimir Solenyi comes from Kyrgyzstan, a country locked between China, Tajikistan, Uzbekistan and Kazakhstan, 3,000 km east of the Caspian Sea, the closest open water.
Despite competing at the Asian Games in the Laser Radial and this week in the Finn Junior Worlds, Vladimir had not seen these boats before this event. The only boats available for training on his country's beautiful lake Issyk Kul are Optimists, Cadets and local boats, the Looch.
He said, “My coach received an invitation from the Moscow Sailing School, so he asked me to come and sail in Moscow for the Junior Worlds. I was glad to come even if I had never seen a Finn for real before. It is a good experience for me and I can learn a lot. It took me some time to understand the rigging...there are more ropes than on a Laser, but I had good help and now I can do it with no problem and understand how it works.”
The Moscow Sailing School purchased 100 Devoti boats and 100 masts for the 2005 Finn Gold Cup and is now graciously making them available to sailors who are coming to compete in Moscow and also regularly invite sailors from neighbouring countries. This was the case for Vladimir. “What I like most in the Finn is the speed it reaches and how it can glide in not much wind. The difficult part is when it gets windy, then I struggle to keep the boat flat.”
Vladimir works as an Optimist coach in Kyrgyzstan, and is a good sailor and a fast learner. Disadvantaged by his 74 kg in the breeze, he is making the most of the light conditions in Moscow.
“I would like to sail more often in the Finn but we have no boats in Kyrgyzstan, we need Lasers and Finn to train for Asian Games or Finn events.”
In the meantime, Vladimir is enjoying the tough competition among the 38 Finn Junior for the World title. In the first race of the championship, Vladimir finished in a very creditable 13th place in his first ever Finn race, but fared less well in the second race with a 33rd to sit in 24th overall.
Nine races are scheduled from Tuesday 26th to Saturday 30th July. The races are being run by Olympic PRO Hans-Peter Hylander from Sweden on Moscow's northern lake, Klyasminskoye reservoir.
Top 10 (38 entries)
1 RUS 6 Kistanov Arkadiy 6
2 RUS 9 1Sivenkov Viacheslav 11
3 RUS 28 Kotlyarov Artur 13
4 TUR 27 Gozen Cem 15
5 RUS 151 Tsvetkov Vadim 16
6 POL 11 Ponieczynski Artur 19
7 GER 127 Massler Julian 21
8 RUS 9 Filippov Viktor 24
9 RUS 27 Kotlyarov Denis 25
10 RUS 111 Yanitsky Andrey 28