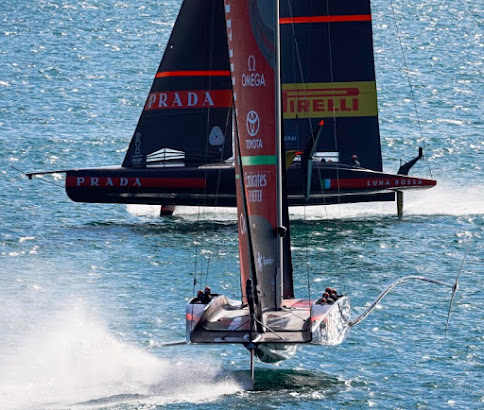 Auckland (NZ), March 16, 2021 - The sixth day of the 36th America’s Cup presented by PRADA comes to an end with just one race completed, won by Emirates Team New Zealand, after an astounding battle of tacking and jibing throughout over 4 legs. Luna Rossa was in the lead up to the middle of the second upwind leg when the New Zealand boat, optimizing on a separation and a big wind shift, managed to break away, round the upwind gate with an 18-second advantage and close the race #9 in the lead.

Max Sirena, Skipper e Team Director
“Possibly one of the best races we have seen in the last 15 years of the America's Cup. The guys did really well controlling at the start, we kept them behind for four legs without ever giving up. After all, we are in the final against a very strong team and I am very proud of the guys on the water and the whole team, because today they raced an amazing race. Obviously we are very disappointed with the outcome, but we are still alive and tomorrow we will go on the water to fight and we will give everything. It's not over yet. "

Francesco Bruni, Helmsman
“It’s a hard one to digest. We raced flawlessly until they overtook us: we had to decide whether to defend the left or go right, and in hindsight it probably was the wrong choice. It was very hard to keep them behind, they definitely had an extra gear because whenever we tried to stretch our lead we couldn't shake them off and as soon as we gave them some space they just set off. We don’t feel too much remorse because the race was conducted very well, but we don’t plan to give up and we will continue to do what we need to do, analyzing where we can improve to get back on the water geared up to go win. "

Vasco Vascotto, Afterguard
“The race was really difficult with tricky wind conditions. I believe the boys raced incredibly well, and Team New Zealand was forced to adapt to our choices. We led the game, and gave a great show of match racing, not only at the start but also throughout the course. This is our mindset, and tomorrow we will keep on racing with this same attitude.”