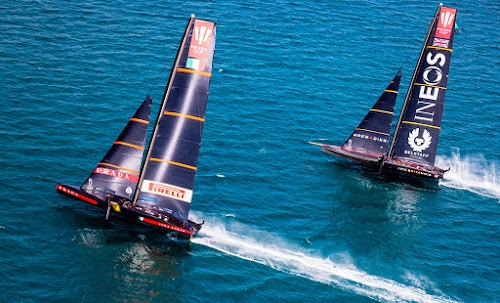 Another weekend of racing in Auckland for the PRADA Cup, the Challenger Selection Series that determines the first team to enter the PRADA Cup Final.  American Magic stayed on shore, at work to repair the damage incurred during last Sunday’s accident, following which the schedule was revised, leaving only two races to be held between Luna Rossa Prada Pirelli and INEOS Team UK on Saturday and Sunday.

The racecourse chosen for today’s racing was course C, with an average of 17 knots from south-west and significant shifts both in direction and intensity. It was a balanced regatta, where both boats alternately took the lead throughout the first 3 legs. When reaching the final downwind the British team stretched forward and crossed the finish line 33 seconds in front of Luna Rossa. With this victory, INEOS advances directly to the PRADA Cup Finals and wins the PRADA Christmas Cup trophy that had not been awarded at Christmas.

Shortly before 4 pm Race Director Iain Murray initiates the start procedures but calls for a delay at less than two minutes from the start, when the boats have just entered the entry box, following a big wind shift that requires the course to be turned around.  A further delay is then requested by the English team to fix a problem with their mainsail cunningham, and the start time is now set for 5.20 pm.
Luna Rossa enters the pre-start area from the left, with the British boat on the right and a few seconds of delay. Twenty seconds from the start INEOS is windward of Luna Rossa, and both boats move towards the left boundary. It is the start of a real match race, with tacking duels among the teams as they alternate the lead. At the first gate Luna Rossa is on port tack; despite its tack in front of INEOS, the British are at full speed and manage to round the mark on the inside and take the lead.
On the downwind both crews are fighting to for the best puffs, reaching speeds of over 45 knots. The British round the gate with a 9-second lead but on the second leg Luna Rossa stretches forward and moves in front. The next see Luna Rossa rounding first. Halfway down the last downwind leg Luna Rossa calls for a protest that is denied by the umpires and INEOS crosses the finish line ahead.
Max Sirena, Skipper and Team Director “Today’s race was interesting but also very complicated, with big shifts in wind direction and intensity. We need to analyze our performance in all aspects that were not perfect and understand where we can do better. On the downwinds, for example, INEOS seemed to be very fast. Now we are preparing for the semifinal against American Magic and I expect it to be very close and competitive.”