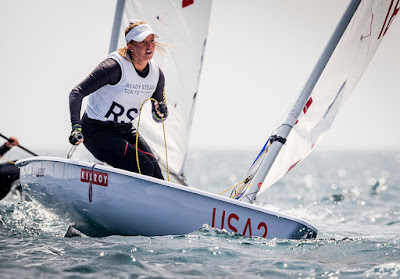 
After last week’s World Championships in Melbourne and several weeks of training at the venue, the US Sailing Team is becoming familiar with what is needed for success at this challenging venue. “Our Radial team has been in Melbourne on and off since December,” said US Sailing’s Laser Radial coach Steve Mitchell (GBR). “We know it is a tricky place to sail, there can be anything from light and hot breezes to solid sea breezes with tough, steep waves and cold fronts bringing thunderstorms and powerful winds. Over the period of a week, we can see all of these conditions, so we have tried to gain as much experience as possible in the venue to prepare ourselves.”
Thanks to their time at the venue, the US Sailing Team athletes have a solid approach to tackle the tricky conditions. US Sailing Team athlete Erika Reineke (Fort Lauderdale, Fla.) has a regimented daily approach that will hopefully prepare her for some solid days of racing. “We’re going to have to adapt in whatever wind direction we get. Each is going to be challenging and it’s the Worlds, so everyone’s trying to bring their A-game,” she said.
“This is the last big event before the Olympic Games, so I think everyone here is trying to give it their all and have a good regatta. Personally, I’m going to try to keep an open mind about the conditions each day and go out, make a game plan with Steve and then do my best to execute it.”
The U.S. athletes have even more reason to bring their A-game this week, as it is the final event that will determine the 2020 U.S. Olympic trials for the Laser Radial. Three athletes are currently in close contention for the single U.S. spot. Charlotte Rose (Houston, Texas) currently leads after an impressive top-ten finish at the 2019 Worlds. Just behind, Olympic veteran Paige Railey (Clearwater, Fla.) trials by three points and Reineke by 12.
Though the sailors may have a lot on the line this week, their priorities don’t differ much from any other international regatta. “The team is not focused on the outcome of the trials during individual races, they are all focused on delivering the best performance they can during the week, both individually and as a U.S. team,” Mitchell continued. “Our goal, as a team, is to make sure we have a USA Laser Radial capable of medaling in Tokyo in five month’s time, whomever that may be.”
The athletes will begin the event with three days featuring the qualifying series, followed by a final series that will split the class into silver and gold fleets.  Racing on Sunday, February 23 will be 2:00 p.m., local time.

At the southern end of Port Phillip Bay, two more classes will simultaneously be competing for their 2020 World Championships. The Sorrento Sailing Couta Boat Club will host the Men’s and Women’s RS:X World Championships from Tuesday, February 25 through Saturday, February 29.
Representing the United States, Pedro Pascual (West Palm Beach, Fla.) and Geronimo Nores (Miami Beach, Fla.) will likewise have the chance to earn selection to the 2020 U.S. Olympic Sailing Team as the Men’s RS:X representative. While Pascual leads the trials over Nores by 12 points, Farrah Hall (Annapolis, Md.) will secure the Women’s spot upon completing a single race.
Similar to the Laser Radial athletes, Pascual isn’t dwelling on the trials element of the event. “I’m really looking forward to the start of the event and the opportunity to show the improvements I’ve made over the last few months,” he said.
In addition to the challenging breeze, our Men’s RS:X sailors will have their eyes on the current this week. “It’s a venue where the wind is shifty and puffy with a lot of current affecting the race area,” Pascual continued.
To maintain some flexibility in the conditions, Nores is looking to start each race in a position that allows him to be adaptable around the course. “For the first two days, we have a really clear strategy,” Nores’ coach Yaniv Meir (ISR) said of their strategy for the week. “Our priority is making gold fleet and we know that we’re looking to have protected starts and develop good speed off the line.”
In the Women’s fleet, Hall is looking to maintain that adaptability by keeping her head on a constant swivel, looking for changes in the puffy and shifty conditions. “In general, the more unstable the racing area, the better it is to prioritize strategy, speed, being patient, and hunting for gusts and shifts,” she noted. “You really have to make sure to look around continuously and plan ahead to connect the dots between gusts. Boards sailing even a couple of lengths from each other could be in completely different wind. Looking around all the time can also be an added challenge for boards when we are physically maxed out from pumping.”
All three of the athletes are looking forward to the opportunity to measure themselves against the world in this class for a final time. As the windsurfing equipment for the Paris 2024 games has been changed to the iQFoil, this will likely be the last major event in the RS:X for many of the athletes.
While the U.S. competitors are excited by the new equipment and the speed foiling brings, Hall has taken this event as an opportunity to appreciate the class and competitors that she’s become so familiar with during her time in the RS:X. “RS:X sailors have developed as a class and a fleet to have a really nice spirit of camaraderie and sportsmanship, plus a really high level of racing. I appreciate our last Worlds on the RS:X for the friendships we’ve formed and the years we’ve spent together competing, plus we are hosted by a really amazing and welcoming club who has done the maximum to help us out.”
In what will likely be the last RS:X event of its size, the 122 boards will begin racing on Port Phillip Bay on Tuesday, February 25 at 1:00 p.m., local time.
U.S. Competitors
Laser Radials – View Full Entry List
Men’s RS:X – View Full Entry List
Women’s RS:X – View Full Entry List

Results
Results will be available, daily, on the event website.
Photography
Event photography will be provided by Jon West.