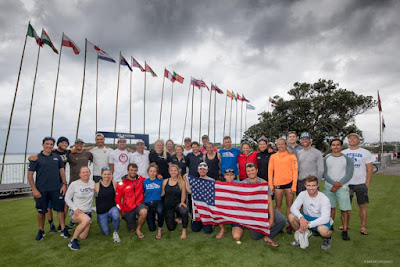 On Sunday, December 8, 2019, the Hyundai 49er, 49erFX and Nacra 17 World Championships in Auckland New Zealand wrapped, marking the end of the 2019 year for the U.S. in these classes. The event seemed to be a turning point for the US Sailing Team after each of the American representatives demonstrated significant improvement throughout the event.
Today’s racing format included an early morning round of fleet racing, followed by a medal race in the afternoon.  Excitement was high, as Auckland conditions delivered yet again 12-20 knots, in a building seaway. Two races were sailed in each fleet.


Stakes have been high, as every competitor has targeted this World Championships as the next milestone on the road to Tokyo. All countries including the U.S., have established temporary residence in Auckland for at least one and a half months, honing skills, setting goals, and fine-tuning their game. Country qualification and early Olympic trials rounds were raced for, as well as the lofty goal of competing in a World Championships!


The overall U.S. team performance has been notable – U.S. boats won breezy races in these tricky high-speed classes, seven U.S. boats qualified for Gold Fleet, and the U.S. posted its best results in four years in all three fleets at the Worlds.


The 49er class sailors Nevin Snow (San Diego, Calif.) and Dane Wilson (Ojai, Calif.), and Ian Barrows (Miami, Fla.) and Mitchell Kiss (Holland, Mich.) fought brilliantly all week to try and capture a highly sought-after country Olympic spot and finished 5th in the race for the available four spots. The qualifying scheme is complicated and finishing one place out of a guaranteed spot doesn’t mean hopes are over. A few scenarios could still deliver the U.S. a slot at the Games.


“While we would have liked to seal up a confirmed seat at the table, I am so encouraged and pleased with our progress in the last two months,” said Olympic Head Coach, Luther Carpenter (Cypress, Texas). “The leadership from coach Mark Asquith has been top-notch, and the bond and effort between team members has been one-hundred percent united.”


Moving forward, Carpenter asserts that the 49er coaches and teams remain focused and committed to developing the talent of these U.S. Men’s 49er athletes, ”We know we have more work to be done, as we are already evaluating and planning to continue the tour Down Under at the 2020 Worlds in February.


Focusing on the positive takeaways from the week is easy for Carpenter after our team demonstrated such significant improvement. “Our squad should feel good about checking off more boxes at this World Championships,” he continued. “Here, this group demonstrated the talent, conviction, and depth that we have strived for in the last four years. Together, I have no doubts that this team will rise to podium levels in the future.”


Beyond the 49er sailors, U.S. competitors proved themselves as formidable opponents in the 49erFX and Nacra fleets, as well. 49erFX teams of Paris Henken (Coronado, Calif.) and Anna Tobias (Pittsburgh, Penn.), and Stephanie Roble (East Troy, Wisc.) and Maggie Shea (Wilmette, Ill.) both wrapped the event with their best result at a 49erFX World Championship, to date. Henken and Tobias finished in ninth overall. Roble and Shea followed closely behind in 13th.


Throughout the week, both teams exhibited resiliency in the face of adversity and setbacks on the water. While Roble and Shea posted several double digits scores during the opening series, they finished in the top ten in the majority of the final series races. Just today, Henken and Tobias demonstrated their ability to persevere after capsizing a mid-race while in third. The duo rallied back well enough to still make the medal race and take a confident fifth place in that race.


In the Nacra fleet, the US Sailing Team likewise made visible improvements. Athletes demonstrated their ability to win races in windy conditions. US Sailing’s Olympic Coach and Performance Manager, Sally Barkow (Nashotah, Wisc.) said that since the U.S. Nacra sailors arrived in New Zealand, “They have excelled in boat handling around the course, speed in strong breeze and highlighted some great downwind foiling stability and speed.”


The U.S. Nacra boats also demonstrated their ability to fight at the top of the fleet. Riley Gibbs (Long Beach, Calif.) and Anna Weis (Fort Lauderdale, Fla.) started off the regatta with several top three finishes and continued to exhibit strength throughout the week.


On a whole, these U.S. athletes are stronger than they were even just a few months ago. Their hard work will continue in just a matter of weeks when they will begin preparations for the 2020 49er, 49erFX and Nacra 17 World Championships to be held in Geelong, Australia on February 10-15.


This event was also one of two that will determine athlete trials for the 2020 U.S. Olympic Sailing Team. The finishing positions of each boat at this event and the 2020 World Championships will be combined. The team with the lowest score in each qualified class will earn the spot to represent Team USA at the Tokyo 2020 Games.


Carpenter says, “All of us here in New Zealand are excited by the progress we’ve seen here in New Zealand. The Olympics are seven months away, and we know that we have the time for at least three more cycles of similar improvement. From staff, to coaches, to athletes, we all believe in each other and have now witnessed and experienced the winning side of our program. I like to reflect on this recent growth and say, winning is now contagious within our team, and be more than just you, be part of something great!  But it’s not just about inspirational quotes – it’s about rolling up the sleeves and doing the work, and right now, we love to work.”


Follow the US Sailing Team on the road to Tokyo.


Learn more about the Olympic trials and country qualification.
U.S. Results at the 2019 Hyundai 49er, 49erFx and Nacra 17 World Championships