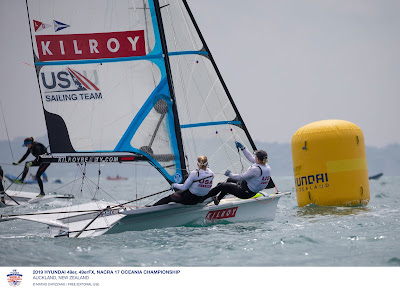 The US Sailing Team is looking solid heading into the 2019 Hyundai 49er, 49erFX and Nacra 17 World Championships. On Wednesday, November 27, the team finished the 2019 Oceania Championships with two boats in the top 10, one of which will take home a medal.
US Sailing Team athletes Stephanie Roble (East Troy, Wisc.) and Maggie Shea (Wilmette, Ill.) led the 49erFX fleet from day one. In the first race of the final series, Roble and Shea endured a black flag penalty allowing local sailors, Alexandra Maloney and Molly Meech (NZL), to slip past them and claim gold. After an impressive week of consistent performance at the top of the fleet, Roble and Shea will take home the silver and carry some positive momentum into the World Championships, which begin on Tuesday, December 3.


Also in the top 10 were US Sailing Team Nacra 17 athletes, Riley Gibbs (Long Beach, Calif.) and Anna Weis (Fort Lauderdale, Fla.). Finishing only two races outside the top ten, Gibbs and Weis also had a consistent week at the front of their fleet. The pair wrapped up the event in eighth place overall.


Top U.S. boat in the Men's 49er fleet was the pair, Andrew Mollerus (Larchmont, N.Y.) and Ian MacDiarmid (Delray Beach, Fla.). Mollerus and MacDiarmid had a stellar day one, ending up in the gold medal position. Despite several finishes in the top-three, the pair, unfortunately, suffered a U flag penalty on day two, which brought them outside the top ten.


Overall, the US Sailing Team will bring some excellent momentum into all three fleets at the World Championships next week. All of the athletes have had time to familiarize themselves with the local conditions and get some practice racing in before the stakes are high.


Next week, in addition to competing for the World Championship title, U.S. athletes will be fighting for selection. This regatta will be the first to impact the U.S. Olympic Sailing Team trials in all three fleets. The Men's 49er athletes will also be fighting to qualify the country for a berth on the Tokyo 2020 starting line.


Sky Sport will be broadcasting the 2019 Hyundai 49er, 49erFX and Nacra 17 World Championship, December 3 - 8, on Sky Sport 9 to their New Zealand Audience, while SidelineApp’s coverage of the worlds is available to international viewers with a subscription fee of just 9.95 euros if purchased by November 30, or 14.95 euros thereafter.