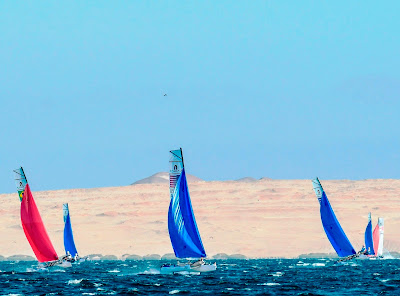 
There are far more countries competing in Olympic class boats than there are available spots at the Games. Therefore, athletes must first secure a berth for the United States in their chosen class before they are eligible to qualify as individuals to Team USA. The four athletes representing Team USA at the Pan Am Games qualified the U.S. for representation in Tokyo by securing their place as the top North American boat.
Gibbs and Weis are currently leading the Nacra 17 fleet with a comfortable 40-point gap separating the pair from the next-highest North American boat, Puerto Rico. Because the Nacras only have one race in the opening series and one medal race remaining, Gibbs and Weis have mathematically secured a spot for the U.S. on the starting line of the 2020 Olympic regatta.
Though the team is grateful to have secured representation, their focus this week has been on making small improvements as a team, “When we went into the week, we weren’t even worried about results,” said Gibbs. “We were just focused on the process and improving together. This accomplishment just goes to show that we’re reaping the benefits of all the work that we’ve done. Continuing to work on ourselves and developing as a team is why we’re here.”
49erFX team, Roble and Shea, also mathematically secured country qualification. They are currently in second place overall, fourteen points ahead of the closest North American competitors representing Canada. With only two 49erFX races tomorrow, followed by a medal race on Friday, their focus will now shift away from qualifying the country to clinching the Silver Medal. “We’re excited to have accomplished this goal for the team,” Shea explained. “The rest of the week, we’ll focus on trying to lock down the Silver. Currently, we’re four points ahead of the Argentineans. With three races left, one of which will have double points, anything can happen.”
As two U.S. boats secured country qualification, another moved into position to do the same later in the week. Men’s 49er athletes, Andrew Mollerus (Larchmont, N.Y.) and Ian MacDiarmid (Delray Beach, Fla.), finished two of today’s races in the top-three. Their impressive results advanced them to the Bronze Medal position, winning a tiebreaker against Canada for country selection.
In addition to the athletes vying for Country qualification, Team USA has several notable performances, across the board. Ernesto Rodriguez (Miami, Fla.) and Hallie Schiffman (Sarasota, Fla.) continue to hold the Gold Medal position in the Snipe fleet. Birthday girl, Charlotte Rose (Houston, Texas), also stands in first place after winning all of the Laser Radial races today. Charlie Buckingham (Newport Beach, Calif.) is also currently tied for first with his training partner, Juan Maegli (Guatemala City, GUA). Men’s RS:X athlete, Pedro Pascual (Miami Beach, Fla.), currently stands in the Silver Medal position. Team USA’s Open Formula Kiter, Will Cyr (Bayview, Mich.), and Open Sunfish sailor, Conner Blouin (Tampa, Fla.), both stand in third.
Assuming races are completed as scheduled, tomorrow will be the final day of the Opening Series. Friday will feature Medal Races in the Men’s and Women’s RS:X, Laser, Laser Radial, 49er, 49erFX, and Nacra 17 fleets. On Saturday, the Lightning, Snipe, Sunfish, and Kite classes will have Medal Races and the sailing events of the Pan American Games Lima 2019 will conclude.
Day Five, U.S. Pan American Games Sailing Team Standings
Learn more about U.S. Olympic Selection.