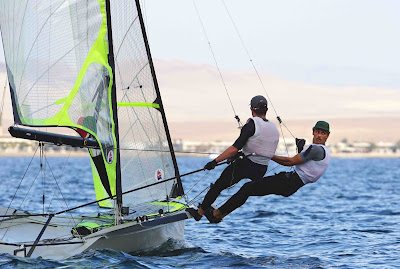 PARACAS, PERU (August 8, 2019) – Sailing athletes at the Pan American Games Lima 2019 have officially wrapped the Opening Series. The top half of each fleet (or a minimum of the top 5 boats) have qualified to compete in a single, double-point Medal Race on Friday, August 9 and Saturday, August 10. Athletes representing Team USA will be competing in all 11 Medal Races. The U.S. is in Medal contention in nine of the total 11 classes.


Day Six, U.S. Pan American Games Sailing Team Standings
Early in the week, 49er athletes Andrew Mollerus (Larchmont, N.Y.) and Ian MacDiarmid (Delray Beach, Fla.) trailed just outside the podium. After today’s races, they are tied for the Silver Medal with Argentina. With only one point separating them from the Canadians in fourth place, tomorrow’s 49er medal race will truly decide the podium.
Despite the tight point spread, Mollerus and MacDiarmid aren’t intimidated by tomorrow’s Medal Race. “Our second half of the regatta has been quite a bit more intense than the first one,” said MacDiarmid. “We’ve come rumbling back, we’ve found our groove, and I’m just really excited to head out there and get it done tomorrow.”
Mollerus and MacDiarmid are among several Team USA sailors who are experiencing the Pan American Games for the first time. MacDiarmid noted that the event offers something special that Olympic class regattas can’t quite measure up to, “It’s been incredible. There’s quite a bit going on that doesn’t necessarily happen at a normal regatta, so it feels like you’re properly representing Team USA. It has a legitimacy that other events can’t compare to.”
Team USA’s Laser representative, Charlie Buckingham (Newport Beach, Calif.), is no stranger to the Games experience. He represented Team USA at the Toronto 2015 Pan Am Games and the Rio 2016 Olympics. Buckingham agreed with MacDiarmid, mentioning the impact that competing at an event like this has on preparation for pursuing the Olympic Games Tokyo 2020, “The whole atmosphere is very similar to the Olympics, the style of racing as well, so it's great experience for Tokyo.”
Tomorrow’s Laser Medal Race will also have high stakes for Team USA. Buckingham noted that, “It’s super tight at the top. Everything is on the table for tomorrow.” He currently stands in the Silver Medal position, three points from Gold and one point ahead of Bronze.
Friday’s Medal Races will feature the Men’s and Women’s RS:X, Laser, Laser Radial, 49er, 49erFX, and Nacra 17 fleets. The Formula Kite, Lighting, Snipe, and Sunfish fleets will compete in their respective Medal Races on Saturday.
Riley Gibbs (Long Beach, Calif.) and Anna Weis (For Lauderdale, Fla.) are currently in the Gold Medal position in the Nacra 17 class. Charlotte Rose (Houston, Texas) leads the Laser Radial fleet by one point. Ernesto Rodriguez (Miami, Fla.) and Hallie Schiffman (Sarasota, Fla.) have maintained their week-long domination of the Snipe fleet. Women’s 49erFX athletes Stephanie Roble (East Troy, Wisc.) and Maggie Shea (Wilmette, Ill.) and Men’s RS:X athlete Pedro Pascual (West Palm Beach, Fla.) have secured a medal in their respective classes and stand in the Silver medal positions. Will Cyr (Bayview, Mich.) is in the Bronze position and has guaranteed a medal for Team USA.
Schedule for August 9, 2019 - all start times are in Central Daylight Time