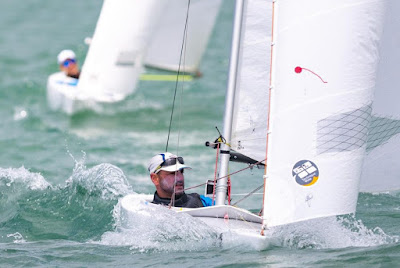 The experienced sailors of the fleet made a good impression on the opening day of the 2019 Para World Sailing Championships in Puerto Sherry, El Puerto de Santa María, Cadiz, Spain.   All four classes took to the water on Day 1 of racing. Three of the classes are running split fleets, as sailors are required to share the boats and must swap between races.


In terms of experience in para sailing, there are few who can match the success of triple Paralympic medallist Damien Seguin - and he leads the way so far in the 18-strong 2.4mR fleet.   The Frenchman won two races and came second in another, and is relishing the conditions and competitive racing in Puerto Sherry so far.

"We had great conditions; the weather and waves were perfect," Seguin said.

"I won the first race after a big battle with Antonio Squizzato from Italy. During my second race, I had a little problem with my whisker pole, but I repaired it on the first downwind to finish second.

"I finished first in the final race, so it was a good day for me!

"I'm a competitor, a sailor, so I do my best every time - we will see what happens during this championship.

"For me, I'm very happy to be here and to see the other competitors."

Seguin revealed he hadn't had much time on the water in the 2.4mR prior to the Championships, as he focuses on his 2020 Vendée Globe campaign in the IMOCA - and admitted it felt a little strange to be sailing between two completely different boats!

"I'm swapping a big boat for a small boat, so it's interesting!" he laughed.

"For about one year I didn't sail the 2.4, but I did a big training session last week.

"For sure it's not the same, the IMOCA is a big solo-handed boat, so I have to manage, but I really enjoy sailing the 2.4."

Squizzato is second by four points, having collected two thirds and a second, with Spaniard Arturo Montes, who won the second race of the day, in third place overall.

Over in the RS Venture Connect, two fleets of five crews each competed from midday until the evening, with five races completed in both.

They won three races and came second in the other two, although they aren't getting carried away just yet.

"I like close sailboat racing and it's nice to have the fleet as tight as possible," said McRoberts.

"We always try and do our best whenever we sail, and if the outcome is a medal, we're happy, but we're not trying to put too much pressure on ourselves.

"I used to do that when I was younger. I was more position-orientated, but now I'm a lot more process-orientated and I'm very happy with our process today."

"We work on our problems and find solutions and just raise our game as high as we can - the outcome speaks for itself," added Lutes.

Their compatriots Marco Gualandris & Emiliano Giampietro (ITA) are currently third, but points are tight at the top.

The Hansa 303 Men's contingent is the biggest with 36 sailors, and they were also split into two fleets.

Both the Yellow and Blue fleets completed three races each, with Poland's Piotr Cichocki gaining an early advantage.

The 2018 bronze medallist and 2017 gold medallist won two races and came second in another, but he's only two points ahead of Frenchman Edouard Champault, who battled hard against him.

"Today was really good and I'm really happy - the weather is really nice, it's sunny and windy, and I enjoyed my sailing," Cichocki said.

"On the water I have a good fight with the French guy Champault. Everyone wants to beat me, so they are pushing every time!

"Every new regatta is a challenge, but I will do my best to win a medal here."

Champault is second overall with a 3, 1 and 2, while Chris Symonds (AUS) of the Blue fleet - and last year's gold medal winner - is third overall with two firsts and a sixth.

Only one point separates each of the top three, with fourth-placed Ana Paula Marques, last year's gold medallist, currently six points behind Weatherly.