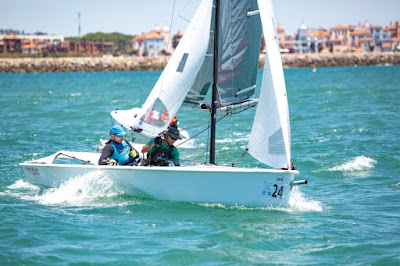 Each class is starting to see its medal race contenders really take hold of this regatta ahead of the final day of racing on Sunday.

Several sailors at the top of the fleets have been harvesting solid results since Day 1, but one team who have been steadily getting better at the right time is British duo Will Street & Johnny Currell in the RS Venture.
After an opening day which they themselves admitted was below par, taking four thirds and one fourth from a five-boat fleet, last year’s gold medal winners have now snuck into the top three.

“We had a really good day today with two wins and two seconds,” said Street.

“It’s all about learning from our mistakes – and I think the mistakes that we made on the first day have helped us sail better.”

“We’re slowly improving as the week goes on; we didn’t have much training before this so we’re happy to be going on an upwards trajectory.”

The RS Venture Connect will adopt a semi-final and winner-takes-all final format, and with experience of taking this sort of victory last year, the pair know that they have a decent shot at gold if they can reach that point.

“We’re sat quite comfortably at the moment, so we’re going to try and continue to improve and try and make the final, and save the pressure until that last race,” said Currell.

In the 2.4mR, Damien Seguin (FRA) is proving to be unstoppable.

The Frenchman won all three of his races today and hasn’t posted anything lower than a fourth place all week.

He already has an 11-point lead over nearest rival Antonio Squizzato (ITA), but points are quite tight between second and fourth.

Currently sitting in third, three points behind Squizzato and four points ahead of fourth-placed Arturo Montes (ESP) is Bjørnar Erikstad (NOR).

The Norwegian is an ever-present at the Para Worlds and is back this year eyeing a medal.

“I’m satisfied with my performance so far,” said Erikstad.

“The conditions are challenging out there and it’s been a while since I’ve been doing much 2.4 sailing – I do too much coaching for that!

“Yesterday was much better than today, but I’m looking ahead to tomorrow now.

“The podium is something I want to aim for and we’ll see if it’s possible.

“Damien and Antonio are both really good sailors, and there are a few good Spaniards as well – it’s a tough fleet.”

Asked what entices him back to the Para Worlds every year, Erikstad added: “I enjoy the sailing and the competition, but I also like to see my friends.

“A few of those sailors are still here and it’s always enjoyable to meet them and race against them.”

Positions have also changed in the Hansa 3030 Women’s fleet, where the top six sailors will progress to Sunday’s Medal Race.

Gornaś was understandably disappointed to lose her lead, but she insisted she will keep battling to try and retain the lead.

“Today I got two thirds and a fifth – I expected better,” she admitted.

“Yesterday the wind was lighter and I did really well.

“We’ll see what happens tomorrow; another day, another race.

“I’m not thinking about medals – it’s not the day for that. There are a lot of races still to come and anything can happen.

“I just have to stay focused and do my best. That’s my goal.”

Three race wins for Cichocki in the Yellow fleet puts him top by eight points, as Symonds contrasted a 1st with a 6th (discarded) and a 3rd.