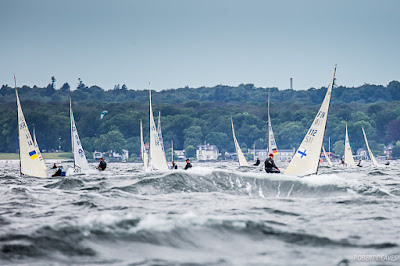 The fleet is split into two groups, and of the four group races scheduled, only three were completed in an unstable and shifty easterly breeze. It was a generaly cloudy day with onshore winds that proved to be surprisingly shufty and unstable. It was a tough day for competitors and organisers.


Former Finn world champion Henry Sprague, from the USA, was first to the top mark in the opening race for Yellow fleet, as the wind peaked at 16-18 knots. Maier was close behind and soon took the lead the win from Paul McKenzie, of Australia, and Volodymyr Stasyuk, of Ukraine.
The wind eased towards the end of the race and the second race was sailed in much lighter conditions with some different faces at the front.
After rounding the top mark in second Percival took the lead downwind, only to lose it on the second beat to Allen Burrell, also from Britain. However, Percival was faster downwind to take the win from Burrell and Ville Aalto-Setälä, from Finland.
Blue fleet did not fare so well. Krutskikh led the first race throughout with Laurent Hay, from France moving up from about fifth at the top to second across the finish, with Uli Breuer, from Germany a close third. The fleet finished in less than 2 knots of breeze and fighting a strong current. Though a start for the second race was attempted for more than two hours, eventually the race team gave up and sent the tired sailors back to shore.
The fleets are now imbalanced, so the first race on Tuesday will be for the lost race, at 12.00, followed by one fleet race for the new groups.  Each day the groups are decided by an innovative random allocation system being trialled this year.

Percival said, “The breeze was very shifty. The first race was not so good for me with a black flag, but I made up for it in the second race and managed to get a win. It was quite tough downwind with lots of waves left over from the big swell from the breeze in the morning. But so far it is a great event. They are doing a great job and we are having a great time.”
Miguel Angel Cabrerizo Morales, from Spain, is sailing his first Finn World Masters and thoroughly enjoying it.
“This is my first masters, but probably not the last. The people are in a great mood, the racing so far has been quite tricky but we’re enjoying it a lot, and hopefully we’ll have a great week for stories and tales and beer.”
Racing continues until Friday with a maximum of eight races scheduled.
Results, though not representative with one race missing, can be found here.