June 8th 2019: the launch of Tirrenia II in Viareggio 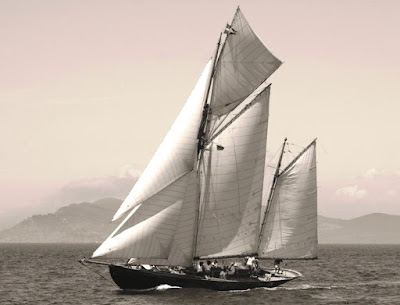 Tirrenia II, an 18 meter gaff ketch built in England in 1914, will return to sea for the first time in ten years following a three year restoration. Open to all, the ceremony will be held Saturday, June 8th, in the Darsena Italia at the Cantiere Francesco Del Carlo, authors of the restoration. Accompanied by the sirens of a fleet of wooden Riva’s, Tirrenia’s launch will be an unforgettable occasion to celebrate the return to the classic yachting circuit of one of the most lovely vintage yachts in the Mediterranean.

Tirrenia’s refit will be one of the most noteworthy of 2019. Celebrating the three year restoration by the Cantiere Navale Francesco Del Carlo di Viareggio, the launching ceremony will be held on Saturday, June 8th at 5:30 pm at the Cantiere Del Carlo on the Darsena Italia in Viareggio.

Designed by Frederick Shepherd, built of teak and launched in 1914 at the H. R. Stevens yard in Southampton, Tirrenia II measures 18.54 meters on deck. Her launch will be accompanied by the sirens of a fleet of wooden Riva powerboats, all part of the Riva Historical Society, in Viareggio for an international Riva event.

Tirrenia II has survived two world wars and a century of yachting without ever suffering extended periods of neglect that could have jeopardized her seaworthiness. During her long life Tirrenia has also had a few rig changes – designed as a gaff ketch, she sailed with a Bermuda rig (photographed by Bekens of Cowes!) for many years before recently returning to her gaff rig.

THE TALE OF TIRRENIA II: FROM NORTHERN EUROPE TO THE CARIBBEAN

Tirrenia II, according the 1914 shipping register, was launched that year in England as Sapho II for Jean A. Valaoritis, who died within the year. Her next owner was Alex C. Carapanos, the Greek minister in Rome, who in 1915 renamed her Dodoni. In 1924, the Italian knight, Cavaliere Guido Fiorentino, purchased her in the Pireo and renamed her Tirrenia II.

President of the Neapolitan branch of the Italian Royal Yacht Club, Fiorentino created the Coppa Tirrenia, a prewar annual trophy presented to the yacht that completed the longest cruise in the Mediterranean. From 1975 until 1981 she was owned by Peter Ball, a retired Royal Navy clergyman who kept her in Monte Carlo, and then until 1989 by Peter Jespersen from Norway.

Jespersen sailed her for more than 20,000 miles, chartering Tirrenia II in Europe, the Caribbean and finally Venezuela. Here, in 1991, the English broker David East sold her to Gianni Loffredo, for many years president of the Associazione Italiana Vele d’Epoca (AIVE). Loffredo shipped her back to the Mediterranean and in 1992 her restoration at the Pitacco, Luxich and Ferluga Yard, in Muggia, near Trieste began, under the expert eye of the famous yacht designer Carlo Sciarrelli, who considered Tirrenia II “a yacht equipped with a soul”.

Re-launched on July 4th, 1993, Tirrenia II campaigned in innumerable classic yachting events, including Imperia and the Argentario, right through 2009. In 2016 she was bought at an auction by two new owners from Lombardy and Piedmont who brought her to the Del Carlo yard in Viareggio where she underwent a complete refit under the direction of Enrico “Chicco” Zaccagni.


REFIT AT THE DEL CARLO BOATYARD

The most important tasks completed during the 2016-2019 refit were removing both garboards (the planks next to the keel), removing the lead ballast and replacing the keel-bolts, fitting a new mahogany keel timber and cutting the rabbets in the keel timber for the garboards.

All the layers of paint were then stripped from the hull and apx. 100 linear meters of planking, both above and below the waterline, were replaced, including replacing the old fastenings with new silicon bronze screws. The teak deck was completely resealed, and a new mahogany rudder fitted. Tirrenia’s interiors are almost completely original and paneled in briarwood.